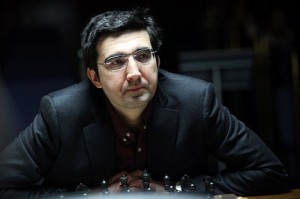 Kramnik is looking for chances in the Pirc

The final round of the biggest tournament of the year has begun. Vladimir Kramnik and Magnus Carlsen are the two contenders fighting for the right to challenge Vishy Anand in the next World Championship match. Three hours into the round, the games are still completely open for three results. It is important to note that in the case of equal scores, Carlsen would be declared winner and world championship challenger thanks to his better tie-break – a greater number of wins.

Vassily Ivanchuk is playing with the white pieces against co-leader Vladimir Kramnik. The Ukrainian, who is showing his usual erratic play, surprisingly defeated Magnus Carlsen two rounds ago, and might as well spoil Kramnik’s tournament today. The ex-world champion decided to use the Pirc Defense to avoid very long home-cooked lines and get a complicated middlegame struggle. White obtained a space advantage and centralized his pieces logically, getting an edge. However, as the Russian expected, there is still a lot of life in the position.

Magnus Carlsen has the advantage of the White pieces against Peter Svidler. A victory would guarantee the Norwegian overall first place. The players repeated the d3-setup of the Spanish which was seen in their previous game. Carlsen also took the game out of the theoretical paths and closed the position in the center. This will allow him to look for chances in the long-term. Follow the game live commented by GM Alexander Ipatov here.