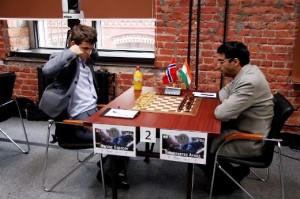 The organisers are delighted to have brought together an exclusive line-up, headed by World Champion Magnus Carlsen and former World Champion Viswanathan Anand.

This is the third edition of the GRENKE Chess Classic, which was also held in 2013 and 2014.

In the 2000s OSG Baden-Baden grew to be the most successful chess club in Germany, and the establishment of the Chess Centre in Baden-Baden in 1996 was another step towards putting the city on the European chess map. The organisation of the GRENKE Chess Classic builds on the tradition of the famous chess tournaments that were held in the spa resort in the last two centuries.

This year’s edition has achieved a rating average of 2752 (1st January 2015), making it a stellar Category 21 tournament. That already makes it the second strongest tournament ever held in Germany, though there’s still time to become the strongest when the February rating list is published. The Baden-Baden Chess Centre’s partners are GRENKELEASING AG and the Brenners Park-Hotel & Spa.

The following eight grandmasters will participate in the GRENKE Chess Classic 2015, playing each other once over seven rounds:

The tournament will be played from 2-9 February 2015 in the historic rooms of the Kulturhaus LA8 in the very centre of Baden-Baden – the same location where OSG Baden-Baden plays its home matches in the Bundesliga. Rounds begin each day at 15:00, with a single rest day on Thursday 5 February.