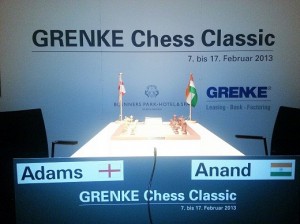 The new German super-tournament has begun! The 6-players double round robin counts with a very interesting line-up. The stellar game of the first round is the clash between current World Champion Vishy Anand and England’s Nr.1 Mickey Adams.

The round kicked-off with three openings from different “nationalities”: a 4.d3 Spanish played by Adams against Anand, a solid Russian Defense used by Fridman against Naiditsch, and a rather tame French put forth by Meier against Caruana.

The battles look pretty balanced until now, but the players’ home preparations are probably drying up and the middlegame battles are about to begin. The organizers have included a rule that prohibits any draw offer before move 40, so there’s a lot of fight ahead!