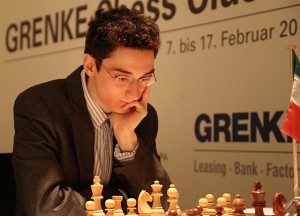 The Ruy Lopez played by Micky and Vishy finished in a 43 moves draw. The English had the initiative for a while, but the World Champion defended precisely with some nice active moves. The 2v2 rook endgame was never far from equality and the peace treaty didn’t take long to arrive.

On the third board, Italian superstar Fabiano Caruana has a big advantage with white. Despite being a pawn down, the fact that Meier’s king never left the center and his bishop is totally out of play on a7, give Fabiano a winning advantage. However, the German still has hopes, since both players have very little time to get to the 40th move.

The second board’s fight in the Petroff is pretty equal and the most probable result is a draw.