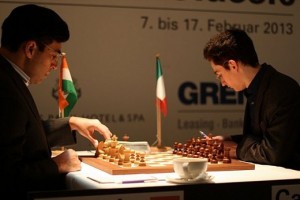 The most anticipated match-up of the Grenke Chess Classic took place on the second round. World Champion Viswanathan Anand and Italian prodigy Fabiano Caruana made a 40 move draw with a surprising speed.

The most striking feature of the game was how fast they made the first 30 moves. It was clear that some deep home preparation in a known line of the Spanish opening was at play.

The final position demonstrates clearly that the game was always destined to be a draw: perfectly symmetrical pawn structures with opposite-colored bishops.

The other quick result of the round was the draw between Meier and Fridman. The lower-seeded players of the tournament exchanged the minor pieces rather quickly and finished the game peacefully after a threefold repetition in 26 moves.