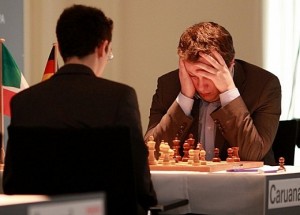 The only players with a plus score in the Grenke Chess Classic face each other in the third round. The Italian star GM Fabiano Caruana has the white pieces against the winner of an epic battle on the second round, Germany’s Nr.1 Arkadij Naiditsch.

Besides being the most important game in terms of the standings, it has turned out to be the most interesting one chess-wise. Naiditsch answered 1.e4 with a Sicilian Defense and the game has become an opposite-side castling affair. Black already has a pawn on a3 and White has advanced his f- and h- pawns forward.

Not only the position is interesting, but the time situation also adds a dramatic touch. Caruana has less than 18 minutes for his last 20 moves and Naiditsch’s 38 minutes remaining do not seem to be quite enough for such a complicated tactical battle.