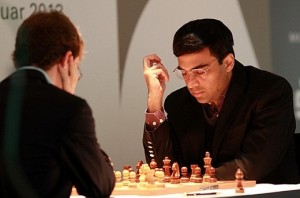 The World Champion Viswanathan Anand has signed his third consecutive draw in the Grenke Chess Classic 2013. He played against the German GM Georg Meier with the black pieces and agreed to a draw after 33 moves.

The game started with a Nimzo-Indian Defense. The Indian chose to give up his central c-pawn for a doubled pawn on the b-file and white went for a structure with the light-squared bishop fianchettoed on g2. A series of exchanges followed and the result was a perfectly symmetrical pawn structure by move 28. The players repeated the position three times by moving their kings back and forth on the g-file.

Meanwhile, the main game of the day is getting sharper. Caruana decided to give up an exchange for black’s strong a3 pawn and the possibility to activate his pieces even more.