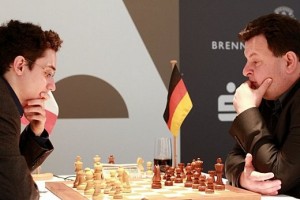 The last game to finish in the fifth round was the draw between the leader and the solid German Daniel Fridman. This draw is enough for Caruana to keep the pole position in the standings with a half point advantage over the World Champion.

Fridman made his 5th straight draw in this tournament, this time with his Petroff. Apparently, Fabiano prepared very well against this line and went for an interesting opposite-side castling structure. Even though the game looked like it might turn into a real fight, the German’s willingness to exchange pieces simplified the position rather quickly. The peace treaty was signed on move 41.

The other game of the round also finished in a draw. GM Georg Meier played with a “safety first” mindset against the always dangerous GM Michael Adams. This strategy proved to be enough, specially because the German led the white pieces. The players started the three-fold repetition on the 31st move.