Two players have gained a whole point advantage over the field in Beijing. Alexander Grischuk and Shakhriyar Mamedyarov won their games today to get to 5/7 points and increase their advantage over the rest of the players. With this result, Grischuk has taken over Kramnik in the live ratings list, and is now the fourth placed in the world.

Those were not the only decisive results, as we saw a very fighting round in Beijing. Five out of six games finished with victories for white. Peter Leko got his first win after drawing the first six games; he was responsible for Karjakin’s second loss in a row. Vassily Ivanchuk is recovering his form; today, he defeated Alexander Morozevich and is now on +1. The other winner of the day was Wang Hao, who beat Anish Giri in a very short game.

Shakhriyar Mamedyarov got his fourth win of the event. After falling against his direct rival, Grischuk, in the fifth round, he is now very much back in the battle for first place. Today, he defeated former world champion Veselin Topalov in 24 moves. This was Topalov’s first loss, which puts him back in an even score, a point and a half behind the leaders.

Black seemed to have equalized rather quickly in the opening, given the fact that Mamedyarov did not got for the sharpest continuations. However, Topalov probably overestimated his chances in the middlegame and started to look for the initiative with 20…Ne4. This mistake was not the decisive one, as there were enough resources to look for a draw, but the unfortunate 22…Nxd1 – instead of 22…g5 – was the crucial blunder that forced the Bulgarian to resign on move 24. 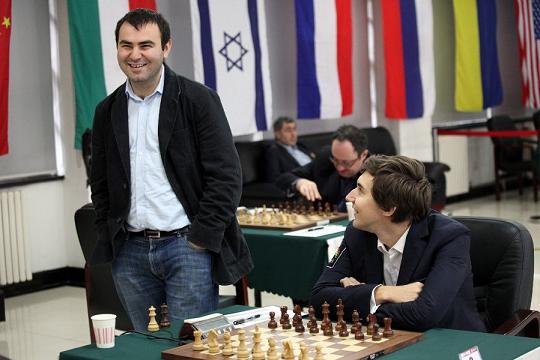 The other leader, Alexander Grischuk, beat Chinese star Wang Yue in very unorthodox style. The Russian has been playing very creatively and proving why he is considered one of the strongest players in the world. Besides Leko, he is the only undefeated player in the tournament.

In contrast to Mamedyarov’s quick win, Grischuk had to work for 77 moves to grind down his opponent. This was probably foreseeable given his opening choice. He went for a very positional line where he gives up a pawn temporarily to get a little more play. By move 26, he recovered his pawn and was left with a better structure. In order to get the full point, he had to convert a rook + pawn vs knigh + pawn endgame, which can be a very hard task given Wang Yue’s ability in this phase of the game. 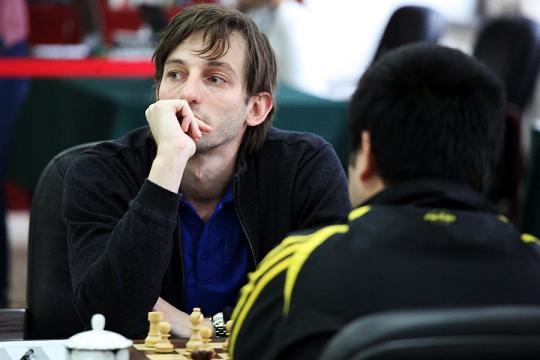 Wang Hao obtained a very interesting victory over Anish Giri. The Chinese used the quick sacrifice on f7 that is often seen in chess clubs, and demonstrated how hard it is to defend against these “incorrect” moves even for a strong grandmaster. The young Dutch GM was not able to cope with the difficulties and allowed his opponent to penetrate his camp. The score-sheets were signed on move 22.

Peter Leko was able to break down Sergey Karjakin’s Queen’s Indian Defense in 75 moves. The Hungarian played solidly, only looking for a playable position. The players reached a queen + knight endgame and everything seemed to be heading towards a draw. Karjakin faltered on move 36 with Kf8 and gave Leko the chance to show his great technical skills. The Russian resigned on move 75. 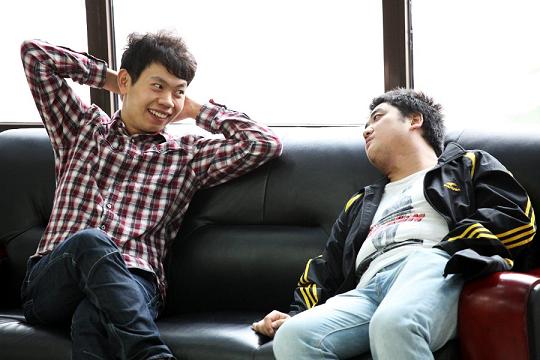 Vassily Ivanchuk defeated his colleague Alexander Morozevich in dynamic style. The game was filled with very difficult tactics, which ended up giving white a favorable endgame with a knight versus two pawns. The experienced Ukrainian converted his advantage patiently and is now part of the chasing pack.

Both Grischuk and Mamedyarov play with the black pieces tomorrow, but that will not stop them from going for the whole point. Another very interesting battle to follow will be Karjakin – Topalov. 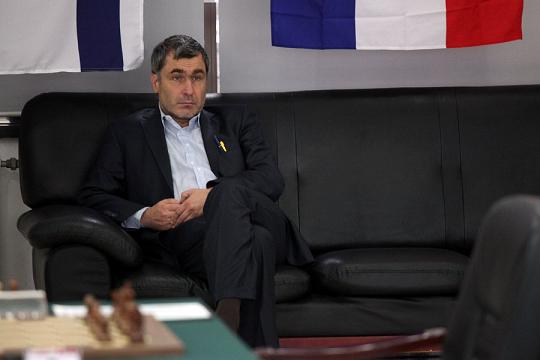