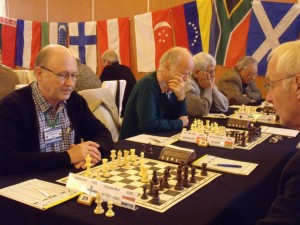 Round 3 of the World Senior Chess Championship 2012was played today in the 5 star Galini Hotel in Kamena Vourla, Greece. The chess fans were treated with fewer surprises, yet very hard fought games in this round.

In the battle of giants on board 1 in the women section, GM Nona Gaprindashvili defeated the leader WIM Natalia Titorenko to take the first place at the current standings. She is joined by the only other victorious player at the top boards WIM Martina Beltz, while 9 other titled players stand at 2,0/3, just half a point behind the leaders.

Only four players remain at 3,0/3 in the open section. These are IM Craig Pritchett, GM Yuri Balashov, IM Vladimir Zhelnin, and GM Mihai Suba. The rating favorite GM Vaisser was held to a draw in today’s round, just as the third seeded GM Timoscenko.
After yesterday’s massive surpises, it was recovery day for GM Sveshnikov, GM Okhotnik, GM Yrjo Rantanen, GM Jansa, GM Pushkov, and IM Karasev. With this the chasing pack now constitutes 14 players at 2,5/3 and 22 players at 2,0/3.

All results from the open section / Standings Open section

Round 4 of the World Senior Chess Championship will have GM Suba – GM Balashov and IM Pritchett – IM Zhelnin as highlighted matches. In the women section top board encounter is between the leaders WIM Beltz and GM Gaprindashvili.
Games tomorrow start at 16:00 ocal time, watch them live here with analysis.