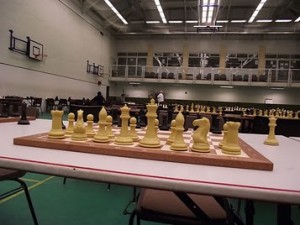 The 87th Hastings International Chess Congress will take place from 28th December 2011 to 28th January 2012 at Horntye Park Sports Complex Leading the field in the Masters Tournament is Chinese grandmaster Wang Yue. Aged 24, Wang is the highest rated player from China to date. He reached No 11 in world rankings at his peak but is currently ranked 49th in the world. English grandmaster, David Howell, is the second highest rated entry, and he played in the prestigious London Classic at Olympia which ended last week.

India is again strongly represented with a men’s team and women’s team taking part. Last year’s event was jointly won by Indian grandmasters Sengupta Deep and A.Das. Appropriately for a Hastings event, a team from Normandy is also taking part though, on this occasion, we are very much looking forward to their arrival!

As well as the Masters Tournament there are Christmas and New Year events for more casual players running concurrently and a Weekend Tournament midway through the Congress. It is not to late to enter and entries can be taken on the first day of play.

Cllr. Jeremy Birch – Leader, Hastings Borough Council opened the event and made the first move in the Masters Tournament on 28th December. 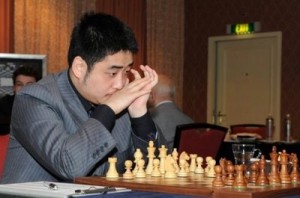 Round 1 report by Stewart Reuben

Yue Wang (CHN) 2697 is the first Chinese player to have taken part in Hastings for some years. He is also the highest rated player ever to have participated in the Masters. In Britain we don’t believe in absurd first round clashes with a difference of over 400 rating points. But with such a high rated player as Yue Wang it is impossible to avoid very nearly such a difference in rating. There are other reasons for using Accelerated Pairings: it is more likely players will be able to achieve a GM norm; the disconcerting and unfair bouncing effect for players jut below the top of the second half is reduced. It is quite likely that mismatches will occur later in the event. But by then, the lower rated players will have earned their right to a place in the sun, and their higher rated opponents won’t be doing so well and will welcome the chance to recharge their batteries.

That the congress starts as soon after Christmas as possible enables many people to take part using their holiday time efficiently. Ambitious players, who travel from a long distance, should arrive at least two days in advance. But travelling in England on 26 December is a nightmare. Thus many arrive on the 27th. You can expect an unusual number of upsets in the first round.

That was written before the first round and thus without the benefit of hindsight. The real upset was only on board 5 where Michael Massoni beat the older Vovk brother Yuri. Both Yue Wang and Andrei Istratescu put in very smooth performances with the Black pieces, David Haydon played well to gain an advantage against GM Nicholas Pert, but then copped out and agreed a draw against Nick while he still stood better in a murky position. Later in the evening Nick told me about a very special ambitious rapidplay/training weekend he is running on a weekend in 2012. Only 10 of the GMs won their first round games. Two drew and of course one lost. Would you have preferred to see more blood spilt in the first round or more competitive chess? It is a matter of taste. Round 2 will see GM Arkell against GM Edouard. There are 22 players left with 1/1 from the top fraction and 19 due to be chopped down by the acceleration.

The world’s first ever FIDE-rated Blitz tournament will take place at the White Rock Hotel, Hastings on Monday 2nd January.

FIDE are starting to collect rating information from blitz and rapidplay games starting 1 January 2012. The two new lists will be published 1 July 2012. The standardplay ratings will not be affected by the blitz or rapidplay results. The ratings of players who are already FIDE-rated will be used initially.

Depending on the number of entries, the tournaments will be sections of 10 with not more than 6 unrated players in each section. This means that each unrated player will be able to get a FIDE Blitz Rating on the night.

There will be no FIDE charge for rating blitz or rapidplay tournaments throughout 2012. The decision about charges for 2013, if any, will be made at the FIDE Congress in Turkey.

The K factor for all players will be 20. If a rated player plays more than 35 games in a period, then his new rating will be his Tournament Rating Performance for that period.

Entry fee: £2.00 if FIDE-rated, £5.00 if not FIDE-rated
Prizes: All entry fees will be returned as prizes
Rate of play: All the moves in 3 minutes, add on 2 seconds per move from the first