Magnus Carlsen and Hikaru Nakamura stormed into the Skilling Open semi-finals as a thrilling day of online chess unfolded.

Three of today’s four ties went to play-offs as the last 8 were whittled down to four who go forward tomorrow to battle for a place in the final of the first Champions Chess Tour event.

Carlsen shut out his great Twitter rival Anish Giri with four draws to steer their four-game match to a 2-2 draw. Carlsen had started the day 1-0 up in matches and progressed without needing a play-off.

Carlsen said: “I have to commend Anish on a very tough fight. It was never easy for me at any moment and the whole match just came down to one game.” 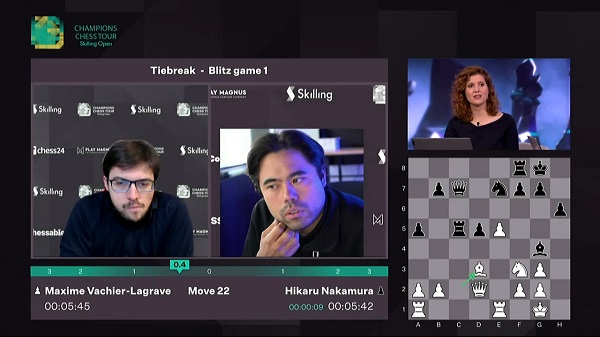 Nakamura, meanwhile, was 1-0 down in his tie against Maxime Vachier-Lagrave and needed to win today’s match just to go level on matches and then win the play-off.

In the preamble, Nakamura went into overdrive to simply overpower his French opponent with a game to spare sending the tie into overtime.

Blitz playoffs are Nakamura’s specialty but the world number 1 in the faster chess discipline simply self-destructed against MVL in a double-edged first game.

But in the second, Nakamura kept his cool after a bad start to hit back before the final Armageddon game saw the American secure a draw and go through to tomorrow’s semi – just.

In the other semis, Russia’s number 1 Ian Nepomniachtchi also started the day behind against Levon Aronian and got a key win to take the lead in game 1.

Aronian blew a chance to hit straight back in a chaotic game 2 before “Nepo” won the fourth to take the tie to another play-off.

It was a similar story in the final last-eight match as Wesley So took the match 2.5-1.5 against Teimour Radjabov to level the score and then triumphed in the play-off.

Tomorrow will see Carlsen vs Nepo, and an all-American So vs Nakamura match in the semis.

Pavel Spirin, Chief Commercial Officer for Skilling, said: “It was a day of comebacks and the dream of a Carlsen-Nakamura final is still a possibility!”

The head-to-head semi-final ties will start tomorrow at 18:00 CET with the possibility of quicker blitz and armageddon tiebreaks if the scores are tied.

Viewers will also be able to participate in interactive activities with the leading chess stars during the season using tour passes to be made available at ChampionsChessTour.com and chess24.com.