The first player in the Khanty-Mansiysk FIDE Grand Prix to have thrown sand into Hou Yifan’s wheels was the Ukrainian GM, Lagno, who successfully held the Chinese to a draw.

In the second position, just half a point behind the leader, advanced the Slovenian GM Muzychuk, who is now the proud holder of three points, after defeating Muminova.

Alone on 2,5 points and third place, comes Zhao Xue, after she drew her game against Ushenina. The fourth place is shared between five players on 50%: Lagno, Ushenina, Kosteniuk, Stefanova and Girya.

After losing their games today, Kosintseva and Muminova are on 1,5 points, as well as the Georgian GM, Dzagnidze, who recovered from a shaky start and won a well prepared game against Tatiana Kosintseva. Last comes Tuvshintugs, on half a point, who hopes for better times after tomorrow’s rest day. 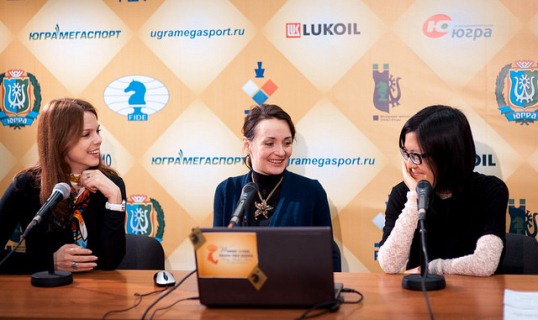 The first to press the break pedal on Hou Yifan’s string of victories was the Ukrainian Kateryna Lagno. Few had expected, though, that the crazy Benoni which appeared on the board would lead to a peaceful end by repetition, as early as move 24. This is the third game the Chinese finishes under 25 moves, an important detail, helping her to preserve energy. Hou Yifan employed a sharp line, entering early complications with a relatively new 12…Rxf4 (a positional exchange sacrifice), showing she is ready to play double edged positions, if this is what it takes to steal the point.

Although surprised by her opponent’s opening choice, Kateryna picked up the gauntlet but kept cool, assessing if the e4-e5 break was good or not along the way. Given the impossibility to foresee and evaluate all the branches of the tree, she restrained herself and brought home a well-fought half a point.

After the unpleasant attacking lesson from yesterday, the Georgian came back in full force for today’s game. The very good home preparation in the highly debated Ragozin soon paid off, as she knew what she was doing up to the 22nd move: f5. Kosintseva put her clock on fire, as she had to find over the board strong defensive but by no means obvious moves. Pressed by the horrendous time trouble, the Russian GM couldn’t keep pace anymore and collapsed under the skilfully exerted attack of her opponent.

An important victory for the Georgian GM, the first one for her this tournament, which brings her not only higher in the standings but also in a better mood right before the rest day.

Having had three Whites in the first four rounds, Stefanova’s performance is a bit unconvincing so far. The terrible time troubles she entered, had an important word in it and, up to a certain point, today’s game against Olga Girya was no exception.

Although the Bulgarian GM did enter more serious theoretical discussion, meeting the Slav with the same kind of setup she had faced against Zhao Zxue yesterday, it didn’t have the desired effect. As the time was ticking faster and faster on her clock, Stefanova took too many risks, played the too ambitious 16.g4, followed by 17.Ne5, which were happily met by her opponent. As a consequence, Black’s coordination was highly superior, allowing her to win two pawns and it looked as if it would be all over soon. But Girya started playing slowly and in mutual time trouble the miracle happened: Stefanova saved half a point in a queen ending with a pawn down; “I guess I was the lucky one today and I definitely look forward to have some rest after four too long games in a row” (Antoaneta) – good timing, tomorrow we have a rest day.

The less topical line in the 4.e3 Nimzo employed by Zhao Xue (with 4…b6) was well met by Ushenina, who played creative chess. She sacrificed a pawn for advantage in development, space and attack and it seemed her strategy was well chosen as she got the upper hand. Under pressure, the Chinese defended well, missing though an interesting queen sacrifice on move 17.

She continued to suffer but managed to hold on to a draw, since Ushenina was not able to find better ways to increase the pressure. A draw was agreed after everything liquidated into an opposite colour bishops endgame.

A good way for the former women world champion to enter the rest day in good spirits: Kosteniuk defeated Tuvshintugs with a smart opening choice and is now back on 50%. She went for the Berlin with 4.d3, in her compatriot’s footsteps, Kosintseva, who had played the same yesterday, getting a winning position against Batchimeg.

If Kosintseva failed to win, Kosteniuk was in no mood to hand in presents and she convincingly increased her opening advantage. Soon the Mongolian went wrong, as the 5 minutes left on her clock for 20 moves were far to little for the complexity of the position. She lost a pawn, then an exchange and everything ended in an over the board tragedy.

In a game that made their trainers’ hair curl, Muminova vs Muzychuk was not a battle for the faint-hearted. After the rather modest and rare Sicilian setup, Muminova soon got into trouble under the Slovenian’s skilful wand.

The position of the Uzbek player went from bad to worse but she gave again a good account of herself by defending a bad position like a lioness! Muzychuk’s technique lacked the necessary precision, as she allowed her opponent to liquidate into a, let’s face it…”all the rook endgames are draw”. But practice shows that miracles can happen, especially with a little help. Under time pressure and after many hours of play and after defending again and again, Muminova collapsed in the end and Muzychuk grabbed the point.

These having been said, after today’s 4th round, we all (players, spectators, commentators) can happily go into a well deserved rest day.