The Hou Yifan Express turned into a jet-propelled aircraft after today’s win over her main contender for the 1st place in Khanty-Mansiysk FIDE Grand Prix.

In a very entertaining and sharp game, the Chinese claimed the victory against the Russian Olga Girya and is now on 7,5/9 points, enjoying a two points lead of the second place.

The amazing string of victories of the Russian star, Olga Girya, was disturbed today by the tournament leader, yet she is the only one who technically can still catch up with Hou Yifan, as she is alone with 5,5/9 on the second position. 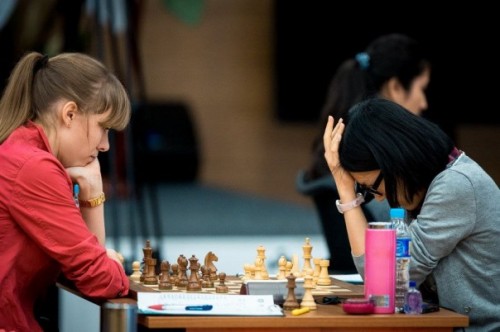 Still on the third place but now shared with two more players, is Anna Muzychuk, who lost against Alexandra Kosteniuk. The Russian GM joined her on 5/9, the same as the Georgian GM, Nana Dzagnidze, after mercilessly defeating Antoaneta Stefanova right on her birthday.

Only two players are on 50%: Anna Ushenina and Kateryna Lagno, who both failed to break the defense of Batchimeg Tuvshintugs and Nafisa Muminova, respectively.

For the Uzbek player, Khanty Mansiysk will have a special place in the drawers of memory, as it was here she scored her last needed third IM norm, after holding Kateryna Lagno to a draw.

Just half a point behind, with 4/9 are: Nafisa Muminova, Zhao Xue and Antoaneta Stefanova, followed by Tatiana Kosintseva on 3 points and Batchimeg Tuvshintugs with 2.