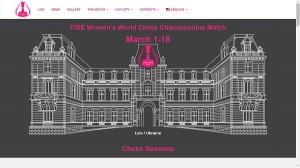 In the 6th round of the Women’s World Championship Match the defending champion Mariya Muzychuk lost with white pieces and allowed her opponent Hou Yifan to increase the lead to 4-2.

Muzychuk repeated the Italian Game and the position became very complex right from the opening. Hou Yifan responded quite aggressively with g5-g4 but also weakened the position of her King.

At the press conference the Chinese player explained that the knight on h4 can be dangerous if it helps White to attack the king but it can also stay out of play as it happened in the game. White had several opportunities to push f6 and secure the square f5 for the knight but Muzychuk was attracted by another idea. According to her, she felt the position was better but she lost her track after 22 moves.