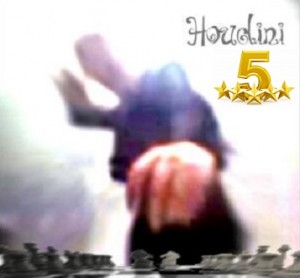 Exciting news for the computer chess world – Houdini 5 chess engine has officially confirmed participation in the Top Chess Engine Championship (TCEC) Season 9. The winner of Seasons 1 to 3 and holder of the bronze medal in Seasons 5 to 7 will enter all-in Season 9 of the competition with a brand new version.

Houdini by Robert Houdart appeared on the scene in 2010. Just an year later, with version 1.5, it was the leading engine in the important rating lists CCRL and IPON. Houdini 2 was released in 2011 and Houdini 3 in 2012. Both were closed commercial engines that partnered with chess software companies like ChessOK, ChessKing, and Convekta. Houdini 4 was available in November 2013, adding around 50 ELO points to the playing strength of the engine. That was the last release for Houdini and until now there was no official announcement on the future of the project.

The head of Houdini – Robert Houdart – reveals the plans and explains, “Houdini 5 release is planned for this year. It is a bit early to confirm the exact dates. TCEC and its long season comes handy in this case. Houdini will start as version 4 in TCEC Season 9. In later stages (Stage 2 or Stage 3) it will be upgraded to a Houdini 5 dev.”

There is no news as of yet what improvements Houdini 5 will contain. TCEC’s director Anton Mihailov comments, “While we do not know all the details yet, the announcement of Houdini 5 itself is an important milestone for chess. The higher competition will be a driver for the whole chess software sector and will have direct reflection on over the board chess as well.” He also adds, “We are ahead of the strongest ever chess championship with 10 participants over 3100 ELO. Most of the competitors have added significant strength over the past months and in TCEC Season 9 chess will be on a whole new level.”

More about Season 9 of TCEC

The Top Chess Engine Championship (TCEC) Season 9 runs from May 1st to December 1st 2016. It is a competition between 32 of the best chess software engines, divided into three stages and a Superfinal. TCEC runs 24/7 until all games have been played. One game is played at a time – the next one starts automatically.

In Season 9 TCEC uses openings put together by Nelson Hernandez (Stages 1 to 3) and Jeroen Noomen (Superfinal). Stage 1 will use a depth-limited opening book of 2 moves. Stage 2 and Stage 3 will use an opening book of 8 moves. The Superfinal will use a variable opening book. If you click the “Opening Book” button at the top you can read in detail how they prepared for this challenge.

The TCEC system for Season 9 is as follows:

Stage 1 is divided into 2 groups which consist of 16 engines each. Each group format is a single round robin. There is 2-move opening book in use here, so the engines have little help from the start. The top 8 from each group will move on to Stage 2, while the rest are out of TCEC for the current Season.

Stage 2 consists of the 16 engines that qualified from Stage 1. It is a double round robin. The top 8 move on to Stage 3 while the rest are out of TCEC for the current Season. There is 8-move opening book in use

Stage 3 consists of the 8 engines that qualified from Stage 2. The format for Stage 3 is an octo round robin (x 8) so that each engine will play both sides of the same opening against each other, four times. There is 8-move opening book in use. After Stage 3 has finished, the top 2 engines will meet in a Superfinal of 100 games.

This match is played with 50 different openings so that each engine plays both black and white of the same position. The match will be presented with opening 1 used in games 1 and 2, then opening 2 used in games 3 and 4 etc. If the match is theoretically won for one side before game 100, the match will still continue until all 100 games have been played. In the case of a drawn match there will be a rapid match of 16 games with a time control of 25′ + 10″ with random openings selected from earlier in the same Season. In case it is still tied there will be a Blitz match of 8 games with a time control of 3′ + 2″. When the Superfinal is over, the current Season ends.

So far Houdini and Komodo have three titles each, while Stockfish has one gold and four silver medals.

The TCEC championships are organized and sponsored by Chessdom.com and ChessArena.com. The Technical operations are led by Martin Thoresen. TCEC continues existing and developing thanks to the huge fan base and their support through the TCEC support packages