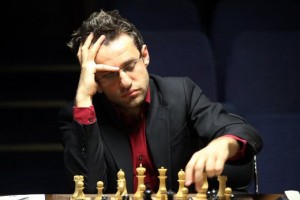 The main event of the year continues today at The IET in London. The sixth round sees both leaders playing the black side of the Ruy Lopez defense. Magnus Carlsen is facing Peter Svidler and Levon Aronian is fighting against Teimour Radjabov. Coincidentally, both of them got big advantages in the clock, as Vladimir Kramnik did against Ivanchuk. This might be a decisive factor in this round.

Peter Svidler opened with 1.e4 and the World’s Nr 1 answered with the Spanish Defense. The Russian decided to avoid long theoretical lines and used the setups with an early d3. Carlsen developed his pieces naturally and somehow managed to get a more active position than his opponent. When the tension in the center broke and some simplifications took place, Carlsen ended up with better placed pieces – his pawns are fixed on light squares, opposite to the color of the remaining bishops. On top of that, the Norwegian has a half hour advantage on the clock.

Teimour Radjabov also went for a d3-setup against Aronian’s Spanish. This game, however, developed differently than Carlsen’s. Radjabov played more actively, advancing his kingside pawns in the early middlegame. The Armenian responded accurately and obtained a better pawn structure, a factor that might come into play later in the game. Once again, the big difference is on the clocks – Aronian has 55 minutes against Radjabov’s 8 to make ten more moves.