The quantitative superiority of the young players at Ikaria this year (more than 50% of the participants were juniors!) transformed to a qualitative one with the 20-years old Hungarian GM Peter Prohaszka finishing clear first and undefeated at the Open Aegean Championship “Ikaros” 2012 with 7.5/9 (6 wins, 3 draws).

The 2nd place was shared among the Ukrainian IM I. Nester, the Greek WGM and champion A.M. Botsari, G. Goumas, P. Christodoulou, E. Kourousis and K. Vafiadis all with 7/9 but with Nester and Botsari having the better tie-break. A.M. Botsari won also the first prize in the ladies category.

In the following places we find S. Malikentzos, N. Galopoulos, M. Maki-Uuro and A. Papargyriou all with 6.5/9 and a very low age average. 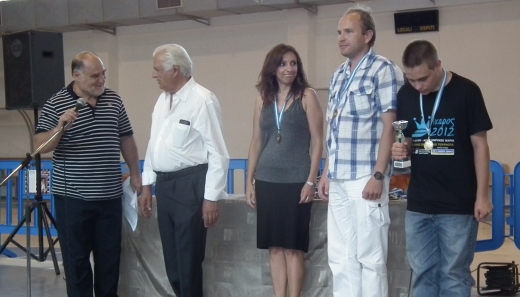 The three winners of International Chess Tournament Ikaros 2012 (from right: P. Prohaszka, I. Nester and A.M. Botsari) with the mayor of Ikaria H. Stavrinadis and the tournament director M. Venios (left)

Alexandros and Stefania Koukoufikis (brother and sister!), both members of Ikaria Chess Club, are the Aegean Champions 2012 in men and ladies respectively. Both qualified for the semi-finals of the Open Greek Championship 2012.

A special prize was also awarded by the Youth Club of Ikaria to the first Ikarian below 20 years of age S. Kefalos.

137 chess players from 6 countries took part in the Aegean Open Championship "Ikaros" 2012. There were 595 games played (271 wins for white, 234 wins for black, 82 draws) while 8 ended with a forfeit. There were no appeals while the combative spirit over the board (as shown by the low number of draws) was very well combined with the friendly atmosphere of the tournament!

A warm applause for the blind chessplayers!

Every year, the closing ceremony of “Ikaros” has a special high point. This year, this point was the award of special prizes to the blind chessplayers that took part in the tournament.

When the vice-mayor of Ikaria Alexandros Skaros awarded the prizes to Katerina Mantesi, Marios Doumpos and Giorgos Aligias, all spectators gave a big round of applause that made the Sports Center of Aghios Kirykos vibrate!

A warm applause also accompanied the award of a special prize to an old friend of “Ikaros”, the president of EOAO “Fysiolatris” Nikeas, Nikos Ornithopoulos by the mayor of Ikaria Mr. Hristodoulos Stavrinadis.

Prior to these special awards, there were the awards to the winners of the tournament. The prizes were presented to the winners by the mayor of Ikaria Hristodoulos Stavrinadis, the vice-mayor Giorgos Kritikos (the man who, during the ’90s, as a mayor of Aghios Kirykos, decisively help the upgrade of “Ikaros” to an international event), the representatives of local authorities and local clubs as well as representatives of chess clubs that were present in the tournament.

The ceremony was concluded with traditional dances performed by the Ikarian department of the Greek Lyceum.

This was the end of a tournament that became 35 years old and was organized by the Municipality of Ikaria (http://www.dimosikarias.gr) and Ikaria Chess Club (http://www.ikariachess.gr) with the help of the main sponsor of the tournament this year, ANEK Lines (http://www.anek.gr).

After the tournament the comments of all participants were very positive with many of them promising to return again in 2013!

Last round upset in blitz!

Immediately after the closing ceremony followed a blitz tournament with 52 participants. First place was shared by N. Galopoulos, S. Malikentzos and G. Goumas with 6.5/7 followed by P. Prohaszka, E. Kourousis, P. Christodoulou and the Latvian IA A. Cimina all with 6/7.

Giorgos Goumas proves to be a very dangerous opponent against leading favourites!

Young winners in rapid tournament too!

On Sunday 15th of July, in the morning, the 3rd Mediterranean Team Rapid Tournament took place. 12 teams took part in this event, most of them consisting of a mix of young players and carrying somewhat peculiar names.

The blitz tournament was conducted by the arbiter Evgenia Zevgiti while the prizes were presented to the winners by the vice-president of the Greek Chess Federation Stathes Efstathopoulos who visited Ikaria to attend a medical conference but found also some time to play in the rapid tournament!

The first outdoor event of “Ikaros” 2021 took place on Sunday evening as part of the centennial celebrations for the Ikarian Revolution and Liberation in 1912.

20-year old GM P. Prohaszka, winner of the main tournament, took against 4 young players in a blind-simultaneous exhibition! Despite the awkward conditions (the Ikarian municipality band was performing not far away, and, at one moment, even a “laterna”, a barrel organ quite popular in Greece several decades ago, passed by, bearing a nostalgic feeling but also hindering the announcement of the moves), the Hungarian GM, after a 2-hours battle, won all his 4 games against 20-years old Ch. Gialias (with white), 12-years old G. Papadouli (with black), 12-years old K. Mores (with black) and 11-years old V. Papakostas (with black).

The colors of the opponents were determined by a draw since Prohaszka did not wish to play white in all games not even to choose the colors himself.

As it was expected the blind-simultaneous exhibition drew the attention of a lot of people who happened to be at the central square of Aghios Kirykos at that time, some of them familiar with chess and some other not.

As it usually happens in these cases, those familiar with chess were asking questions about the exhibition match (the rules etc.) and those unfamiliar were replying to these questions often giving extraordinary answers! :) The move announcement and the position-checking during the exhibition were conducted by Nikos Kanelis and Stefanos Heropoulos.

Details about International Chess Tournament “Ikaros” 2012 can be found at: http://www.ikaroschess.gr