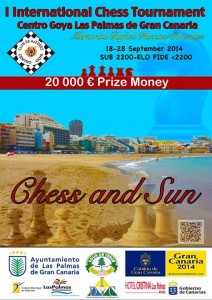 The first edition of International Chess Tournament Centro Goya is scheduled to take place from 18th to 28th September 2014 at the Lounge of Hotel Cristina***** in Las Palmas, the most populous city of the Canary islands.

No doubt, this is a magnificent opportunity to enjoy Chess, in a sunny seaside setting on the beautiful beach of Las Canteras, which every year attracts thousands of visitors.

The event will be a 10-round Swiss with a time control 90′ + 30″, valid for ELO FIDE and open to players without FIDE ratings and players with FIDE  ratings under 2200, who have not overcome 2250 points of ELO FIDE from 1st January 2014.

For reasons of capacity, the number of players will be limited to 300 players, giving preference to the guests of the hotel “Cristina” Las Palmas.

The generous prize fund in the amount of 20.000 € is divided as follows: