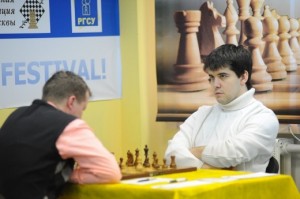 Two of the round 8 leaders at Moscow Open 2013, GM Ian Nepomniachtchi and GM Dmitry Kokarev, finished their game from round 9 with an early draw. The game started as an interesting version of French Defense, but the players repeated moves and draw was signed on move 21.

This leaves the first position up for grabs. Contenders are all co-leaders from the previous round – GM Boris Savchenko, GM Pavel Maletin, GM Rauf Mamedov, GM Ildar Khairullin, and GM Pavel Smirnov.

The games continue at this moment, follow Moscow Open 2013 with computer analysis