This is the first time “Chess Olympiad” for the blind is organized in Asia. India has the rare honor as the first Asian country to host world’s highest chess event for the blind.

After the successful conduct of the 11th Individual World Chess Championship for the blind 2006 in Goa, International Braille Chess Association (IBCA) Congress awarded this event to India unanimously.

The last edition at Heraklion in Greece, the 13th IBCA Chess Olympiad, saw a total of 34 countries participating, comprising of 164 players. The traditional powerhouse of chess, Russia, took the gold with Ukraine and Spain clinching the silver and bronze medals. 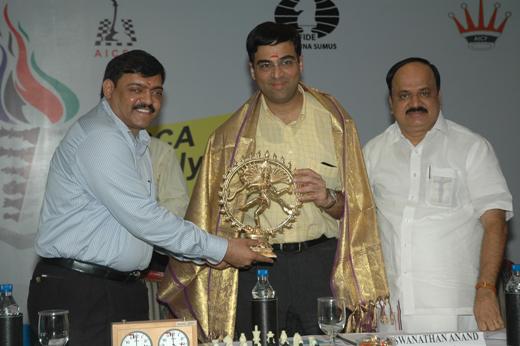 Chief Guest World Champion Viswanathan Anand has been a big moral support to the Indian blind team all through. Anand’s positive initiative helped Indian team’s participation in the IBCA Chess Olympiad last time at Greece. His continuous support, guidance and blessings have given huge encouragement to entire blind chess fraternity.

Impressed with the blind team’s work, Anand said, “I have interacted with many visually challenged players and I can say honestly that these players have a special talent to see the pieces in their mind when they play. For us it is very difficult to be able to imitate that special skill.”

Anand further added, “I am really happy to see them so motivated. What has struck me is their love for chess. I have found that they are preparing intensely for the Championship and are not shying away from hard work. I think they are quite motivated and feel deep down that they will be successful.” 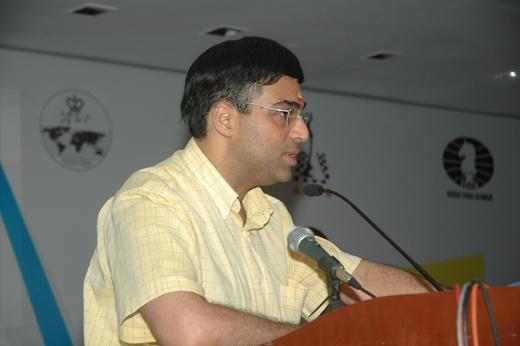 The five time world champion had a word of praise for the sports loving Chief Minister of Tamil Nadu. He said, “The blind chess player from Chennai, Srikrishna, could take part in the world blind event in Greece, thanks to the timely support of the Chief Minister of Tamil Nadu” and concluded, “On this occasion of Chess Olympiad I welcome all the players to have a great time in my home town Chennai.”

He added, “All India Chess Federation for the Blind has been striving hard for the progress of the blind chess players with great consistency. Recently, a FIDE rated tournament, exclusively for the visually challenged was conducted at Hyderabad and many are in the offing. I place my hearty thanks to World Champion Viswanathan Anand and FIDE Vice President D V Sundar for their constant support for the cause of blind chess players in India. My sincere thanks our title sponsors, the Tata Group and Tata Consultancy Services for their invaluable support in making this mega event come to India. I thank our hospitality partner, Hotel Royal Le Meridian, Chennai for provided us with world class playing facility, accommodation and a grand venue that is sure to spell success of the event”.

Mr JCD Prabhakar, President, All India Chess Federation during his speech mentioned that this is a golden era of sports in the state of Tamil Nadu as visualized by Honorable Chief Minister J Jayalalithaa.

He recollected Chief Minister’s instant help to the needy blind chess player Srikrishna, who went to play the World Junior Championship for the Blind in Greece last year, thanks to the timely help from the Government, which can be counted for several first’s in the field of sports. 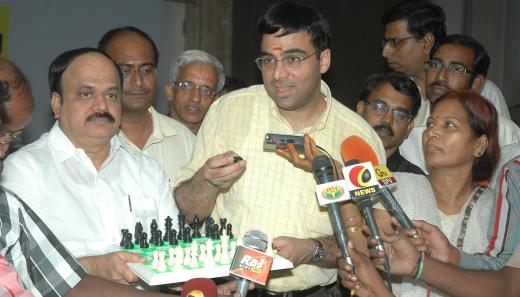 Mr Raj Kumar, Additional Chief Secretary, Government of Tamil Nadu said that the Chief Minister is willing to make this the No.1 sporting state in the country and promised all support for the success of this Chess Olympiad.

About 31 countries have confirmed their participation, including 25 International masters, 5 International Woman Masters & 120 FIDE rated players. The championship will be a team event, comprising nine rounds and a match between two teams will be played on four boards.

Each team will field a maximum of five players, fifth player being the reserve. The time control is two hours to each player for the first forty moves and one hour each for the remaining game. In addition to the gold, silver and bronze medals to the top three ranked teams, similar medals are at stake for the best three individuals on each of the five boards.

The Championship will be organized at Hotel Royal Le Meridian, Chennai and the Top board games will be webcast LIVE. The games can be viewed through web links from http://www.aicfb.in/ and http://ibca-info.org/ besides regular updates of the tournament.