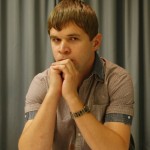 Here are the final standings of the Semi Finals. Join us for the live games from the World Rapid Chess finals