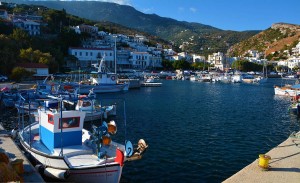 A view of the port of Aghios Kirykos, the capital town of Ikaria, where Ikaros 2016 is held

Most of the rapid tournament will take place on Saturday 9th of July (individual tournaments) and on Sunday 10th of July (Mediterranean Team Rapid). Winners will be awarded with cups, medals and local delicacies.

Another novelty will be the lecture about rapid chess that will be held on Saturday 9th of July (prior the rapid tournaments) and will focus on the differences between classic and rapid games, time management and common mistakes (an how to avoid them).

From 11th till 19th of July the 39th Ikaros International Chess Tournament will take place. As last year, the tournament will be split in two groups based on the rating of the participants.

Apart from rapid, various other activities and events are schedules including: blitz, blind and Chee960 tournaments, simultaneous exhibitions, chess by the sea, solving competition, lectures, lessons and sightseeing tours. See the schedule of parallel events here (.doc) or here (.pdf).

Participation fees are again kept low while additional discounts are offered to families, club teams, juniors, unemployed, or people with disabilities. There is also extra discount for those who will pay by bank transfer by 1st of July and even higher discount for those who will pay earlier, by 30th of May (this discounts correspond more or less to the cost of one night). See costs and additional discounts here (.doc) or here (.pdf).

Moreover the sponsor of Ikaros 2016, the ferry company Hellenic Seaways S.A. will offer a discount on the ferry tickets for the tournament participants and their vehicles (the exact discount percentage will be announced soon).

So far several strong players have expressed their wish to play at Ikaros 2016. The tentative list with the highest rated participants so far has as follows:

It is very nice to see two Greek champions on the list: Vasilios Kotronias and Antonis Pavlidis.
For more info about Ikaros 2016 check the tournament’s webpage at:
http://www.ikaroschess.gr,