The 7th round of the European Youth Chess Championship 2014 in Batumi was played on Sunday. The first seed in the youngest Open group Ilya Makoveev from Russia is the only player who managed to win all 7 games in the tournament.

In the youngest girls group three players with 6 points are in the lead – Melenchuk Olga (RUS), Zavivaeva Emilia (RUS) and Nadzamova Viktoria (SVK).

In the Open group U10 Armenian Gharibyan Mamikon leads with 6.5 points, while in the same age group in girls section Tereshechkina Taisiya from Russia and Sinitsina Anastassia from Estonia lead with 6 points. 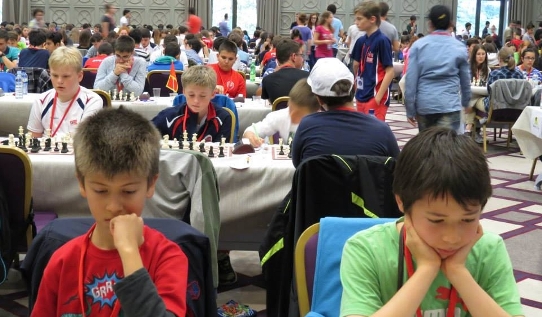 Three players tie for the first place in the group Open U14 – two Armenians FM Martirosyan Haik and FM Hakobyan Aram and Fakhrutdinov Timur from Russia, all with 6 points. Greek WFM Avramidou Anastasia is in the sole lead with 6.5 points in the girls section U14.

In the Open group U16 Spanish FM Suarez Gomez Julio leads with 6 points, while Ghukasyan Siranush from Armenia leads in girls group U16 with 6.5 points.

The first seed in the Open group U18 and the only GM in the tournament Avital Boruchovsky from Israel recovered from the loss from the 3rd round and now leads along with IM Yuffa Daniil from Russia. In the oldest girls group WFM Fataliyeva Ulviyya continues the winning row and leads with 6.5 points.

The Championship will be decided in the remaining two games, after which Europe will get 12 youth champions for 2014. Top games are broadcast live daily at 3.00 pm (local time).