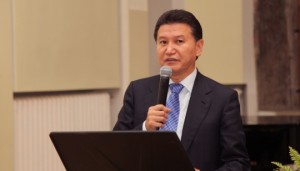 The International Olympic Committee (IOC) must recognize chess as an Olympic sport, President of the World Chess Federation (FIDE) Kirsan Ilyumzhinov told a press conference at the Interfax head office, as quoted by Kyiv Post.

“The FIDE’s primary task is for chess to be included in the Winter Olympics program and to be already recognized by the IOC as an Olympic sport. We have regular meetings with the IOC executives. Meetings with the IOC are also scheduled for next month,” Ilyumzhinov said.

He said that FIDE Presidential Candidate Garry Kasparov has recently been criticizing the IOC executives, which might have an adverse effect. “Lately he (Kasparov) has been speaking out against the IOC, accusing the IOC and its President of corruption, which is not very good for the FIDE,” Ilyumzhinov said.

At the same press conference Ilyumzhinov announced that World Championship Match Carlsen-Anand will be held in Sochi, Russia.

The Russian Chess Federation website provides more quotes in regard to the elections:
“In particular, the question was raised about potential violations of the Code of Ethics of FIDE and the laws of United States and Singapore in connection with the infamous agreement between Garry Kasparov and FIDE General Secretary Ignatius Leong. According to Ilyumzhinov, this issue is currently being examined by the FIDE Ethics Commission, which is soon to deliver a verdict. Commission can even prohibit Kasparov from participating in presidential elections.”

Russian newspaper Kommersant earlier wrote that:
“Kirsan Ilyumzhinov has written to the members of the FIDE Executive Committee and President of Singapore Tony Tan Keng Yam drawing their attention to violations by FIDE Secretary General Ignatius Leong, who is also a key member of Mr. Kasparov’s Presidential ticket.”

Of the regular process, GM Kevin Spragget posted this morning that “Kirsan Ilyumzhinov registered an unofficial 50-vote lead over challenger Garry Kasparov, and the current standing is 81–31.”