IM Jens Kristiansen and WGM Galina Strutinskaya are 2012 FIDE World Senior Chess Champions, after they won the most prestigious senior title in the world at the WSCC in the 5 star Galini Hotel in Kamena Vourla, Greece.

IM Kristiansen finished with 9,0/11, half a point ahead of his closest competitors – silver medalist GM Anntoly Vassier and the bronze medalist GM Evgeny Sveshnikov. IM Kristiansen started as 9th seeded in the competition and was held to a draw right from the start in round 1. He quickly recovered and gained speed to achieve 7 wins in the next 9 games, drawing only with the two rating favorites GM Evgeny Sveshnikov in round 5 and GM Anatoly Vaisser in round 9.

This left him at the leader’s position for the last 4 rounds, and a draw in the final game against GM Miso Cebalo was enough to confirm the dominance of the Danish player. 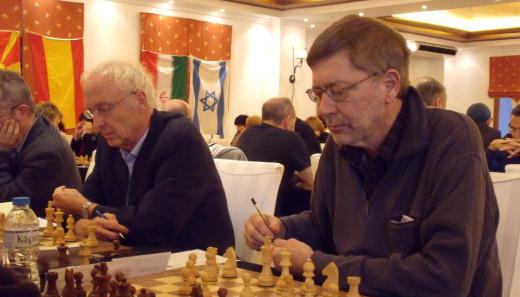 WGM Galina Strutinskaya got a dramatic title from the World Senior Chess Championship for ladies. She finished with 7,5/11, the same points as the silver medalist WGM Tamar Khmiadashvili and the bronze medalist WGM Elena Fatalibekova, but a better tiebreak brought her the gold medal. WGM Galina Strutinskaya had a rough start after a draw and loss in the 2nd and 3rd round. She quickly recovered with three consecutive, in round 6 she defeated the rating favorite GM Nona Gaprindashvili, however right after that she lost with white her round 7 game against WIM Titorenko. A final sprint of 3,0/4, WGM Galina Strutinskaya caught the leaders and surpassed them on tiebreak.

Reports from the World Senior Chess 2012

R6: First places up for grabs after round 6

All results from the World Senior Chess Championship