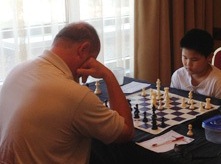 IM Michael Brooks of Missouri went 5-0 to win the 59th edition of the Iowa Open held August 24-25 in Coralville, Iowa.

IM Young gave up a draw against Iowa Co-Champ Dan Brashaw which left Young needing a win in the last round to get to second.

On Friday evening prior to the tournament the Iowa Quick Chess Championship was held. 33 players competed in the 6 round event including IM Brooks and IM Young. This time IM Young was pronounced the champion. Iowa Co-Champ Dan Brashaw had a promising position against Young, but could not convert. IM Brooks got knocked off by Byambatsogt Tumurkhuu, then could only get a draw vs. IM Young in the last round. Tumurkhuu and Petros Karagianis tied for second.

In all sections combined there were 191 entries. The goal is to continue to grow this tournament and increase the number of titled players over the next few years.