Six players are leading the tally with 4 points viz GM Enamul Hossian of Bangladesh along with five Indian International Masters.

Playing with white pieces on the top table Prasanna chose Spanish opening but opted for closed variation instead of entering into preparations of top Grandmaster. He maintained slight edge throughout the game. Both the players signed the treaty on 39th move, when GM Aleksej felt that he could not outwit the youngster anymore. 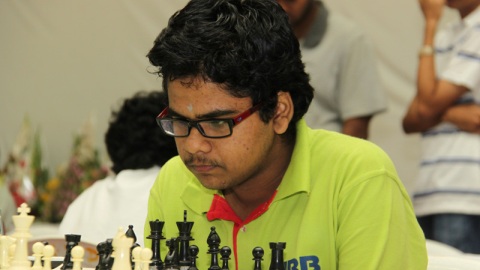 IM Aksayraj Kore (ELO 2384) chose quiet line with 6. g3 in Najdorf variation of Sicilian defense. In complications he gave up exchange but got one Bishop and Knight for the same. However black had sufficient compensation. Ambitious Kore refused to go for the repeat on 37th move and went for attack. However GM Enamul Hossian cleverly exchanged the pieces to remain pawn up in Rook ending. Thus winning the game in 48 moves.

Rakesh Kulkarni (ELO 2233) of Podar College, who was the only untitled player among the leaders yesterday, lost to IM Himanshu Sharma (ELO 2421). Playing Sicilian Alapin System, Rakesh mishandled the opening and had to pay a heavy price. By 20th move he was 2 pawns down. Experienced Himanshu did not give him any chance and Rakesh had no option but to resign in 32 moves.

The tournament can be watched live on www.mumbaichess.org