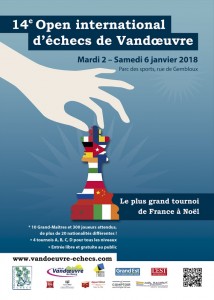 GM Sergey Fedorchuk won his first 5 games but then lost from GM Maxim Turov who took the lead. Round 7 proved to be decisive when Turov lost with white against IM Robby Kevlishvili while Fedorchuk also lost against GM Chen Lin. The leading pair drew their games in the last round and were joined by IM Ider Borya, who won his last game.