The 8th round of the Reykjavik Open was played today. The top four boards finished with draws and the leading pack has grown to six players. The surprise at the top is the 14-years old Chinese IM Wei Yi, who today beat GM Maxime Vachier-Lagrave.

The Turkish young star played actively, moving his pawns forward to gain an important space advantage. The position was very tense and the mistake committed by Ipatov was decisive – his kingside light squares were very weak and the Chinese took the advantage.

The top boards at Reykjavik

GM Ivan Sokolov has not been showing his real strength here in Reykjavik. He lost today against Polish GM Martin Dziuba. The Dutch GM resigned on move 68, when his opponent was about to win a bishop endgame a pawn up.

The surprise of the round was the victory by IM Wei Yi against second seed GM Maxime Vachier-Lagrave. The French star probably was over-confident and went forward carelessly with 14…g5. The Chinese took advantage of his opponent’s adventurous ideas and got the win on move 33.

The chasing pack that stands at 6/8 points is composed of eleven players, including rating favorites GM Anish Giri and GM David Navara. 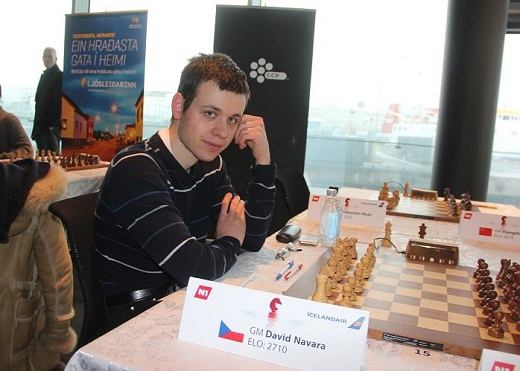 Navara had a nice win today against British GM Simon Williams. The Czech player simplified the position knowing that Williams thrives on complications. The final sequence of the game saw Navara sacrificing a piece to get a very strong pawn chain on a3-b4. Williams resigned on move 32.

Besides the presence of Wei Yi among the leaders, the Chinese representatives directed another surprise on the lower boards. WGM Wang Jue defeated French GM Sebastian Maze in 33 moves. Maze played passively and the young Chinese was not afraid to move forward and gain a big initiative that granted her the full point.

Everything will be decided on the last two rounds at Reykjavik. Replay/follow the games here.