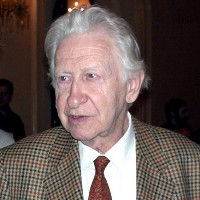 FIDE regrets to announce the death of Grandmaster Vasily Smyslov who has passed away on 27th March 2010 in Moscow.
He was one of the strongest chess players in the world and the World Chess Champion from 1957-1958. Smyslov was twice equal first at the Soviet Championship (1949, 1955), and his total of 17 Chess Olympiad medals won is an all-time record.

Smyslov was one of the six players selected to compete for the 1948 World Chess Championship tournament to determine the successor of the late Alexander Alekhine as champion. He finished second behind Mikhail Botvinnik.

After winning the Candidates Tournament in Zurich 1953, Smyslov played a match with Botvinnik for the title the following year. The 24-games match ended in a tie (seven wins each and ten draws), meaning that Botvinnik retained his title.

Smyslov also wins the next Candidates Tournament at Amsterdam in 1956, which led to another world championship match against Botvinnik in 1957. Smyslov won by the score 12.5-9.5 and became the seventh World Chess Champion. The next year, Botvinnik had a right to play rematch, and won the title back with a final score of 12.5-10.5.

Until the last days Vasily Smyslov was interested in chess and attended tournaments held in Moscow.