Russians Ernesto Inarkiev and Aleksandra Goryachkina became individual leaders in the Men’s and Women’s Cup of Russia Stages within the frames of the Moscow Open 2015. They are the only players of 400 other athletes, who managed to win all four games.

17 players are half a point behind Inarkiev, including the ranking favorites of the competitions Ian Nepomniachtchi (Russia) and Franciso Vallejo (Spain). 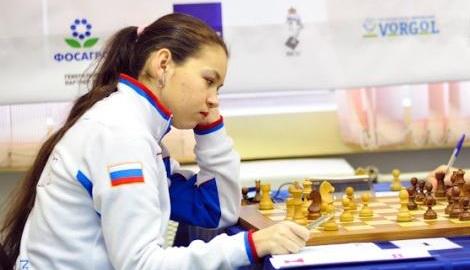 The leaders of the A. Pochinok Memorial Student Grandmaster tournaments defended their positions. Samvel Ter-Sahakyan with 3,5 points is the only one to take the first place in the Men’s tournament. Russian Daniil Dubov approached the Armenian chess player very close, he has 3 points. Both Daniel Sadzikowski from Poland and Daniil Yuffa (Russia) scored 2,5 points.

Irine Kharisma Sakundar (Indonesia) with 3,5 points is leading in the Women’s tournament. Her closest opponent Russian Alina Kashlinskaya is half a step behind. Three chess players scored 2,5 points. These are Dinara Saduakassova (Kazakhstan), Gunay Mammdzada (Azerbaijan) and Petra Papp (Hungary).

In the Veterans’ competitions a number of leaders is reduced to four. Evgeny Sveshnikov (Latvia), Nikolai Mishuchkov, Oleg Zilbert and Evgenij Kalegin (all from Russia) scored 4 points and gained the lead.

Seven chess players show a 100% result in the Amateurs’ tournament.

The games of the 5th round will start on Wednesday, February 4th at 16:00 local time.