For the first time after several years, the Championship was played under 14-players round robin format, comprising top four rated players of India, defending champion and nine players from the qualifying event National Challengers, held earlier.

As former world champion Vishy Anand and P. Harikrishna did not opt to play, the two slots were filled up from the Challengers.

Grandmasters Parimarjan Negi and K Sasikiran, B Adhiban and MR Lalith Babu all from Petroleum Sports Board were seeded from one to four in that order. 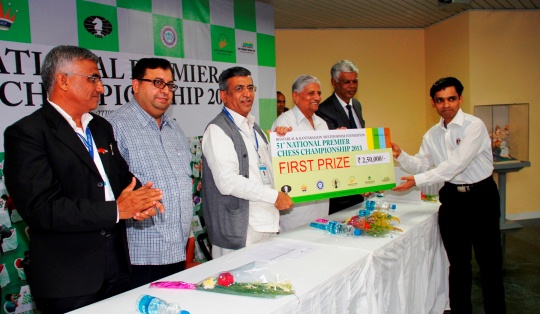 V. Vishnu Prasanna, grandmaster from Tamil Nadu, Debashis Das (whose GM title was confirmed in the Presidential Board at Chennai recently) and GM-in-waiting Aswin Jayaram of Tamil Nadu are the remaining cream of players in the top half of the starting rank.

The first part of the championship was an intense race between Sasikiran and Lalith Babu, both demolishing their opponents one by one. At the end of the seventh round, they had six wins and one draw each, amassing 6.5 points, an amazing phenomenon for a tournament with an average rating of 2492.

Negi had a dismal show until seventh round, gathering only 3 points and was out of contention.

In the eighth round, Akshat played gem of a game to beat Lalith Babu by sacrificing queen, knight and then opting to give away a bishop too. Sasikiran drew with Deepan to emerge sole leader with 7 points. Not deterred by the loss, Lalith came back strongly to beat Ashwin in the ninth round and Sasi met with an unexpected loss at the hands of Adhiban, allowing Lalith to surge ahead with 7.5 points.

In the crucial round ten, Sasikiran came up with a sterling performance and defeated Lalith, snatching the lead again with 8 points. Adhiban defeated Deepan to join Lalith with 7.5 points each.

While Sasikiran drew his game with Thej Kumar in the eleventh round, Lalith Babu got the better of Deepan, so that he was on par with Sasikiran at 8.5 points. Adhiban also had to split the point with Debashis Das to remain on third spot with 8 points.

Sasi continued his fine run in the twelfth round to outwit Rathnakaran to garner 9.5 points and Adhiban dealt a blow to the title hopes of Lalith by beating him and collected 9 points at the end of the penultimate round.

In the climax round, both Lalith Babu and Adhiban won quickly and Sasikiran needed a win to wrest the title, creating tension and anxiety amongst spectators. Sasikiran won the exciting rooks and pawn ending to be crowned as national champion again after a gap of ten years. Adhiban who scored 10 points finished second and Lalith Babu was on third with 9.5 points.

Of the ten lakhs rupees prize money, winner Sasikiran received a a cash prize of Rs.250000/- (two lakhs and fifty thousand rupees /approximately 4100 USD) and runner up Adhiban was richer by Rs.140000/-.

14th ranked player got Rs.20000/- and all the players received glittering trophies. Thej Kumar added one more GM norm to his kitty and is waiting to reach a rating of 2500 to get the coveted GM title.

The venue was Jain Hills, a serene, salubrious and ambient with virtually no traffic. The green valley with regular visit of monkeys to the pond opposite to the hall, pleasant chirping of parrots and sparrows and sumptuous food delighted the players and enhanced their playing ability. An unforgettable tournament, with ever lingering memories for all participants.