Like in the previous year, the team from India (Velammal Vidyacaya from Chennai) won the final tournament of Belaya Ladya. The Indian schoolchildren defeated all their rivals in 9 rounds to score 33.5 points. The winners are entitled to participate in the Aeroflot Open 2019. 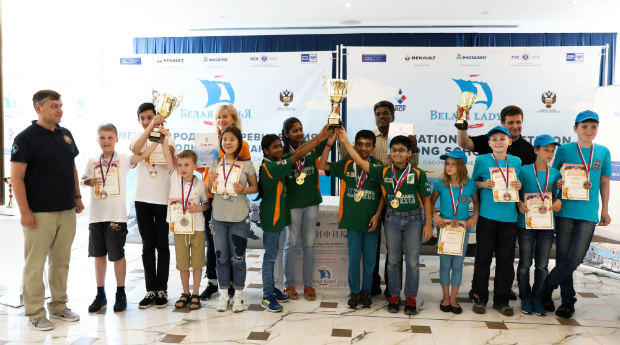 The chess players from Yekaterinburg showed the best result among the Russian teams thus having repeated their success of the last year. The silver medalists scored 25.5 points.

The representatives of Saint Petersburg took the third place with 24 points.

A team from orphanages and boarding schools was participating in the final competition for the fourth year in a row. Children from the Boarding School №26 from Ryazan Oblast, who had won the Ascension tournament (Sochi, 2018), joined other participants in the Belaya Ladya finals. This was made possible by RCF programme aimed at providing chess education to the children growing without parents.

On June 3-6, the all-Russian conference of teachers and pedagogues of additional education, who had been taking an active part in the Chess Universal Education in Russia contest, took place in Dagomys during Belaya Ladya.

In parallel with Belaya Ladya, the final competition of Chess in Schools project conducted by the Russian Chess Federation together with Elena and Gennady Timchenko Charitable Foundation was held. 9 teams from Kemerovo, Novosibirsk, and Pskov regions, Altai Krai, Krasnodar Krai, Zabaykalsky Krai, Chuvashia, Ingushetia, Udmurtia, and took part in it. For the second year in a row, the tournament was won by the Pskov region team.