Adhiban B, Sethuraman S.P, Vidit Santosh Gujrathi, Sengupta Deep and Sasikiran Krishnan and their captain Ramesh have become the heroes of the Asian Nations Cup 2016.

With only one unexpected draw against Mongolian Open team, the Indian chess players have won the rest of their matches during the Asian team competition – Asian Nations Cup 2016 in Abu Dhabi. After the last round we wanted to congratulate them with the victory.

ACF Media: Gentlemen, tell me, what do you feel now?

Ramesh: It is a fantastic championship for teams. Our team is very young backed up by the experience of Sasikiran. We worked daily to win the tournament. We did it once again after winning the same tournament in Kolkata. But I think Chinese team was not participating then. So this event is almost special because we could beat China in a direct encounter, finishing ahead of them. I hope it will be a case which we will have in future as well. 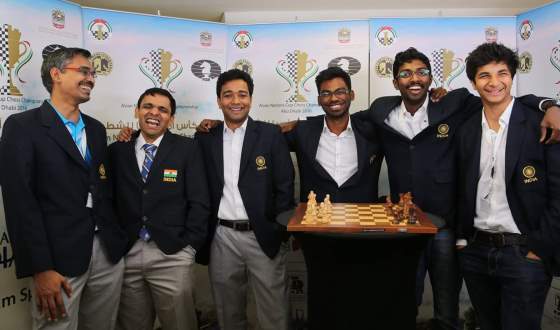 ACF Media: You did not lose any game throughout an entire tournament. You have made the only draw in the match against Mongolians. Adhiban, can you comment on this?

Adhiban: At some point we really lost control. We were even very close to lose the match. You could have congratulated a different champion maybe. But then we pulled a draw and we managed. So, the tournament went all good for us. Moreover it was a victory against Chinese team which was the key match that helped us win the tournament.

ACF Media: Sethuraman, tell me, how is it to win the Chinese team?

Sethuraman: It is very good. Actually last time we made them lose to our team and somehow we did not win the championship. This time we won against them and we won the tournament. So it makes the tournament very special for us.

ACF Media: Sengupta Deep, tell me, how did you personally play? Did you lose any game?

Deep: No, I won two games and I drew one more.

ACF Media: Sasikiran, how was the championship going on for you? You have been active in chess for so many years. Another victory in your pocket, tell me what feelings do you have?

Sasikiran: Well, it always feels nice to win the tournament. Especially if it is a team championship. As it was mentioned here, it is a special event for us. Last time we outplayed Chinese team but we did not manage to win the whole event. So, it is quite sweet. We hope to play well in the forthcoming Chess Olympiad and World Team Chess Championship as well.

ACF Media: Vidit, when we had an interview here some days ago, you predicted that your team will win the tournament. How is it to feel that you were right?

ACF Media: Ramesh, are you happy with the performance of your guys?

Sasikiran: I would also like to take this moment to thank the sponsors and organizers of the Cup. The tournament was conducted in extremely perfect conditions. The food was excellent. The playing conditions were fantastic as well.

Adhiban: Yes, this was one of the best tournaments we have ever participated.

ACF Media: On this positive note of sincere gratitude of Indian team to its sponsors and the organizers, we are again congratulating you, guys, with an excellent victory. We wish you all the best!

SPICE Cup 2015 – Participants
The 2015 SPICE Cup Open, sponsored by Webster University and the Susan Polgar Foundation, is scheduled to take place on 17-22nd October at the ...