The last double round in the tournament schedule, right before the finishing straight, was widely expected to help clarify things at the top of the standings in the inaugural European Individual Championship for Small Nations, but instead only served to complicate the situation further.

As the clash of the leaders ended without a winner, and with three other players remaining in close pursuit and strengthening their challenge with positive results, the fight for tournament victory and a place in the next World Cup is as tense as ever, promising lots of excitement in the last two rounds.

Andorran grandmaster Oscar De la Riva Aguado managed to retain his slender lead after the events of the day, but it took a herculean effort from him in the afternoon game against his closest rival, IM Michael Wiedenkeller from Luxembourg.

Both players arrived having won their morning games without undue effort, against Renato Frick and Antonis Antoniou respectively, after the latter committed serious mistakes leading to rapid loss of material. 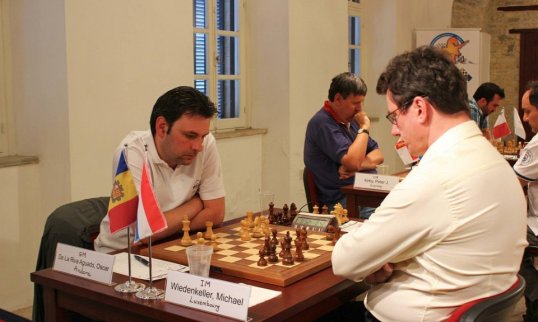 The leader felt compelled to sacrifice an exchange in order to reverse this trend, but a further error in time pressure left him in a very difficult situation.

The game kept going for several hours, with Wiedenkeller trying to disrupt White’s fortress, but he didn’t manage; the transposition to a pawn-up endgame was the best he could find, but it promised him no more than a draw, thus allowing De la Riva to remain half a point ahead of the field.

European Individual Championship for Small Nations – 1st Individual FIDE Zone (1.10) Championship 2014 is organized by FIDE, the Cyprus Chess Federation (KYSO) and the European Chess Union, with sponsorship from the Larnaka Tourism Board and the Municipality of Larnaka, and takes place at the Larnaka Museum Historical Archives from April 22nd to April 30th.