The 3rd Indonesia Open Chess Championship (IOCC) 2013 held from 9-18 October at the Sahid Jaya Hotel in Jakarta proved to be a great success.

At the grand closing ceremony which featured an evening of traditional dance which was joined in enthusiastically by the participants, Hashim Djojohadikusomo, President of the Indonesian Chess Federation who also sponsored the tournament, expressed his happiness at the many Indonesian players achieving title norms which satisfied his objective.

He went on to thank the foreign participants for their feedback and hoped that much could be incorporated without sacrificing quality in next year’s event. 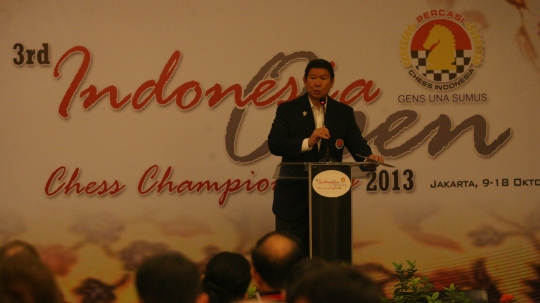 GM Alexey Dreev was the winner and received the first prize of USD 20,000. In second place was GM Alexander Moiseenko and third was GM Nigel Short.

Pride of place went however to IM Farid Firman Syah who made all Indonesia proud by emerging as the top junior.