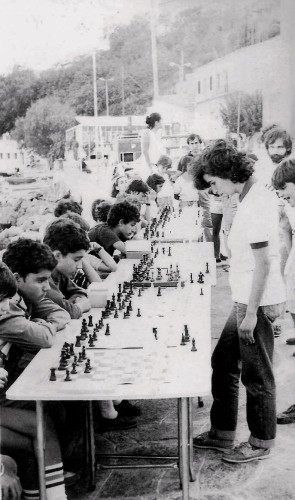 Simultaneous exhibition by WIM Eva Kondou at the central square of Aghios Kirykos back in 1984. The legendary Greek champion from Santorini is taking part again this year in “Ikaros” and is one of the favorites for the title of female Aegean Champion 2013!

The International Chess Tournament Ikaros becomes 36 years old this summer, celebrating with yet another marvelous tournament. Traditional but also modern and always in a very friendly as well as competitive atmosphere, with participants ranging from 6 to 85 years of age and from grandmasters to novices, the event has started in Ikaria, Greece.

From 1978 till today thousands of chess players from 5 different continents have taken part in the tournament. This year, under quite unfavorable financial circumstances and with several important chess events at Rio (Achaia), Anogia, Leros and Paleochora (Chania) coinciding with Ikaros (this has been the first time that an international chess tournament in Greece coincides with four other major chess events), the friends of Ikaria confirmed once more their trust and love for Ikaros tournament and the number of participants exceeded the initial expectations.

Read: Why do people people come back to Ikaria part 1 and part 2

On Saturday 13th of July, during the 1st round, 120 chess players faced each other over the board. Their number will be considerably increased during the next rounds after the arrival of the participants that these days have been taking part at the Greek National Youth Championships taking place at Rio.

The 36th International Chess Tournament “Ikaros”, aka Aegean Open Championship 2013, is once more organized by the Municipality of Ikaria and Ikaria Chess Club at the spacey Sports Center of Aghios Kirykos. The games commence at 7.00 p.m. (on Tuesday Wednesday and Saturday at 11.00 a.m.) with free entry for all visitors. The closing ceremony will take place on Saturday 20th of July at 7.00 p.m. while the 4th Mediterranean Team Rapid Tournament will be held on Sunday 21st of July.

More info about the 36th International Chess Tournament “Ikaros” 2013 can be found at: http://www.ikaroschess.gr

Participants and round 1 results