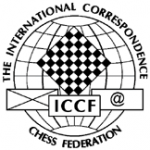 ICCF is proud to announce the start of the new and revised CHAMPIONS LEAGUE.

There are some significant changes regarding structure and reflection time.

ONLY the former A group will still be called CHAMPIONS LEAGUE.

It will consist of the teams placed 1st to 7th in Champions League 5.

Plus the teams that have placed first or second in the former B groups.

The former B group will now be called CHALLENGER LEAGUE.

UNUSED QUALIFICATIONS WILL BE LOST.

The PROMOTIONAL LEAGUE will be an ongoing tournament with start as soon as a new group is filled.

CHAMPIONS LEAGUE and CHALLENGER LEAGUE will play with a reflection time of 250 days and an increment of 10 days for every 10 moves played. There will be NO LEAVE available for the tournaments.

PROMOTIONAL LEAGUE will play with 100 days and an increment of 10 days for every 10 moves. NO LEAVE.

Registrations to this event are possible either via DIRECT ENTRY or via the respective National Federation.

Registrations will be open from the upcoming weekend until the 15th of March.

The DE fee will be 45€ or the equivalent in the chosen currency. This represents a 25% reduction of the entry fee to the previous edition.

There will be a separate Announcement (including qualified teams from the old CL5) for each of the 3 stages (to be published latest after the next weekend), as well as revised FAQ (published latest end of January 2015).

WHY make these changes?

The changes in the structure should allow a fixed 2 year cycle and a reduced waiting time for new teams to participate in this series of events (especially: Ongoing start of PROMOTION LEAGUE.)

ICCF is proud to announce that this new event is sponsored by www.Chessdom.com