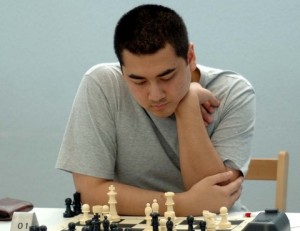 GM Alexandr Fier is a man on fire at the moment, after winning the Brazilian Championship 2018. He took a moment from his time to speak with Chessdom’s editor GM Marian Petrov. A conversation with the Brazilian champion by the Bulgarian champion.

Marian Petrov Alex, first I want to congratulate for winning Brazilian title!
Can you tell us your impressions of the Brazilian championship, how was the competition?

Alexandr Fier The Brazilian Championship is always a hard tournament, and now they changed the format from Round Robin to KO, which makes it much more intense. I finished second place in my last two tries, so I am really happy to win the title.

MP Many people were hoping to see you in the final against the legend Mecking, what do you think about his performance?

AF I was not expecting Mecking to reach the finals at all, and I was even surprised he managed to reach the semifinals. It was clear that he was out of shape and struggling from the first round already. Mekhitarian for me was favourite in their match and won without much problems.

MP You have played recently a few tournaments in Brazil, are you happy
from your performance and is it better for you when you play in your
own country or you prefer to play abroad?

AF I played 3 tournaments in Brazil during this trip: Floripa Open, that is a big open with about 400 players, the championship of the Paraná province and the Brazilian Championship. They made a big effort to bring me during this year and also the last one and I’m really happy because not only I have good tournaments to play, but also I can see my parents and many friends. Since I live now in Georgia, it’s a good opportunity.

About my results, I can say that it exceed my most optimistic predictions! I shared first in the Floripa Open (second on tie-brake), first place in Paraná championship, and first in the Brazilian Championship, I played 27 games in this month and managed to win 37 elo points! A big step to come back to 2600.

MP How many hours per day you work on chess

AF My routine depends a lot if I’m playing tournaments or not. If I’m travelling I try to prepare a bit for the games and relax most of the time. Since I play many tournaments with double rounds, there is not much time to do anything else. When I’m at home I try to study more, but I don’t have an exact number of hours, it can be anything from 1 to 6, let’s say.

MP Computer chess is very important in nowadays preparation. Currently the championship of the best engines TCEC (Top Chess Engines Championship is going on. Do you follow the games?

AF I check some games from TCEC from time to time, and I think there are very interesting games.
Computers are a big part of a chess player professional life, and I don’t think there is any GM that are still only working with books. The engines make a bigger impact on the openings, making some lines not playable anymore. Some people complain about it, but I believe that for any line that the computer refutes, he can create 3 more variations that were not considered before as well.

MP What are your future tournaments and are you going to play in the
Olympiad?

AF I have two strong closed tournaments now, first I’m going to Amsterdam to play a GM norm tournament with about 2475 average, and after I go to Saint Louis to play a tournament with 9 GMs and a 2500 IM. March and April are slower months, and since I lowered my rating I could not get conditions in some tournaments I would like to play. The Olympiad is definitely on the agenda, the Brazilian team will be decided on first of May, so many players have the same ambition as me. Hope it will be ok! Hopefully I can convince some friends to come to Tbilisi before the tournament.

MP -We will follow soon the Brazil women championship, can you tell us your expectation about it?

MP Who do you think will win the Candidates Chess 2018?

AF I have absolutely no idea about who is going to win, but I will be happy to grab some popcorn and see them fight each other!