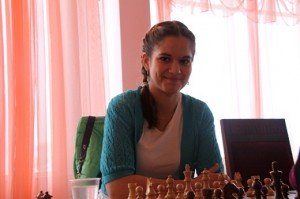 This year the grandmaster from Moscow, graduator of the RSSU, Alina Kashlinskaya is playing in the Moscow Open Women’s Cup of Russia tournament in the status of a ranking favorite. She is the first guest of the tournament press-center and is kind to answer our questions.

– Hello, Alina! Do you remember how many times you played in the Moscow Open?

– I played many times in the RSSU Cup, won’t be able to name the exact number offhand. In 2009 I fulfilled the standards of the international master level by playing in the A tournament (now it’s called the Men’s Cup of Russia tournament – editorial note). Then I played in the round-robin student competitions, and in recent years I’ve been playing in the grand Swiss-system tournament – the Women’s Cup of Russia event. A couple of years ago I was leading the competition with a 100% result after six rounds, but as a result shared 2-4 places, and was placed forth according to the tie-breaks. Last year I won a silver medal.

– Why have you decided to play the Moscow Open this year?

– I wanted to take part in a strong tournament, and also to spend some time with my family at home. Now my husband and I live in Poland. And I miss home-made meals that my mom cooks. Besides it’s nice to start a chess season with such a strong competition.

– You won the third place in the last Superfinal of the Russian Championship. Are you satisfied with such a result?

– It was my fifth Superfinal in a row, and I had a goal to show a worth result. I didn’t have any idea that I would go there to win only a gold medal. My experience says such argumentation never lead to big results. However, I faced a crucial moment in the first round – I managed to beat a very difficult opponent – Valentina Gunina. I felt, luck would accompany me in this tournament. It was also funny that at the draw I pulled out the number that provided me with more games with black. I was upset a little bit but Olga Girya calmed me – one of the tie-breaks is a number of games played with black – so it would serve for better! And it turned out so that I shared 3-4 places with her, and finally took a bronze medal thanks to the number of more games played with black. Of course, I was happy with the result.

– How do you spend time during the tournament, what are you doing after games?

– Usually I read books or watch one episode of some serial. Previously I never watched serials, but my husband and many of my friends persuaded me to try. Now in my daily life I’m trying to limit myself, but once I lost control and managed to watch 16 episodes in one day! Now serials serve as a small bonus – I switch them on after my daily plan is fulfilled.

– What memories do you have about the studies in the RSSU?

– I have very warm memories. Now when I live in another country I can compare. Our University provided us with all the possibilities to develop our skills if we are talking about chess: supported us morally, provided us with a free schedule… As a rule, chess players have to choose between sport and studies in other countries. And quite often the choice is done in favor of studies. In our case we have a chance to combine.

– What goals do you have this year? What tournaments do you plan to play in?

– In the nearest future I will go to the Women’s European Championship, and will also play in the round-robin tournament in Holland. I don’t like to define an exact goal, I’m more about advancing the level of my skills. It’s easier to play thinking like this. Of course there are people, who are able to win with an idea of victory in their minds, but I’m not in this number. I just play, develop myself, and I’m happy with this.