The rating-favorite of the women’s tournament Anastasia Bodnaruk achieved her first victory. Playing black, she defeated Olga Sviridova. After the conclusion of the game, Anastasia gave an exclusive interview to the official website.

– As the rating-favorite, have you started the event with a lot of confidence…?

– As a rule, my opponents in the first round of the Moscow Open are not the most challenging ones. Now, for example, even though I played black, I was able to capitalize on Sviridova’s mistake right out of the opening. So it was not difficult to win this game. 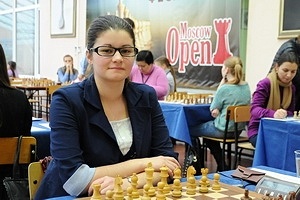 – How did you like the opening ceremony and the organization of the tournament?

– I always mark the Moscow Open on my calendar. One could say that it is a compulsory event. The tournament is of the highest quality. The conditions are good, and food and accommodation are covered by the organizers.

– Obviously, you are aiming at the first place…

– As a rating favorite, I have no other options. However, occasionally I like to arrange unpleasant surprises for myself. Like losing points in games against relatively weak opponents. I hope this time I will be able to avoid such losses.

– After Nadezhda and Tatiana Kosinsteva refused to play for the Russian team at the World Team Championships, you have a chance to strengthen your positions in the national team. Do you feel ready to compete at such a level?

– The fact that there is such a conflict is bad for Russian chess. I do not want to comment on it. I was invited for a training camp and I will try to capitalize on this opportunity. It’s not everyday that you are invited to work in the national team.

– Very recently there was a competition at Wijk aan Zee. What is your opinion about China’s Hou Yifan?

– It was evident that she was nervous. However, she started to play much better in the second half of the tournament. Take for example her three victories while playing black and her drawn endgame against Anand!

– Are you playing successfully against men?

– I rarely have a chance to really gauge my strength. However, once I was able to defeat the second player in Hungary, Almási Zoltán…