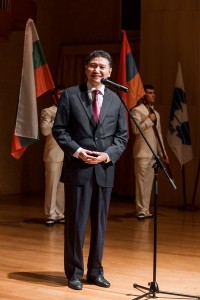 Chessdom: Here we are with the FIDE President Kirsan Ilyumzhinov. Mr. Ilyumzhinov, Khanty Mansiysk is hosting once again the world’s chess elite.

Kirsan Ilyumzhinov: Yes, Khanty Mansiysk has turned into a “Chess Mecca”. Since 2005, when I signed an agreement between FIDE and the former governor of Khanty Mansiysk region Alexander Filipenko for promotion and development of chess, all chess activity has been growing – from professional chess to chess in schools. We have organized many chess tournaments.

It is curious, in 2005 Magnus Carlsen and Sergey Karjakin played the World Cup here. Norwegian Chess Federation and Ukraine Chess Federation asked me, as FIDE President, to nominate them. Their chess career started growing exactly from Khanty Mansiysk. Now one of them, Magnus Carlsen, is World Chess Champion, while the other is going to play here in the strong Candidates tournament.

For me, it is very nice that the authorities of Khanty Mansiysk support chess on all levels. They have the program Chess in Schools, but they also promote chess in each village, in small cities, and institutions too. For example, this morning I opened a chess hall in one of the buildings of Gazprom, next week I am opening a chess hall in a local bank, three months ago we opened a chess club in the hospital. All this is because the governor of Khanty Mansiysk Natalia Komarova supports chess at 100%, including top level events. Only in one month distance we will have Candidates tournament, Presidential board meeting, a Women’s Grand Prix, after that World Rapid and Blitz.

Chessdom:… this is true, but what about Men’s Grand Prix? You announced one event for next year, but the calendar starts in 2014.

Chessdom: Back to this year’s World Championship cycle. The winner of the Candidates tournament will challenge Magnus Carlsen. Do you have interest from potential bidders to host the match?

Kirsan Ilyumzhinov: We have several proposals to organize the FIDE World Chess Championship 2014. I cannot announce where the interest is from, I can only say one of them is a beautiful big city in Europe. But it also depends who the winner of the Candidates tournament is, maybe the country of the challenger will organize the match.

Kirsan Ilyumzhinov: Usually every year I visit 80-90 countries, three years ago was record with 108 countries. It is all connected to the main target for me, that I announced at the General Assembly in Khanty Mansiysk, this is to reach 1 billion chess players, 1 billion people who can play chess. How can we get to these people? It is possible only through the Chess in Schools program. That is why I support the program.

In many countries that I visited, like Mongolia, Angola, Nicaragua, Mexico, etc, I have signed agreements between FIDE and the Ministry of Education. You can see what happens with such agreements in time. For example in 2006 I signed agreements with Armenia and Azerbaijan, they have introduced chess in the school program and you see how it is nowadays. Another example is Mexico, where several years ago I discussed with Minister of Education and now chess is in 200 000 schools for millions of kids. And the subject of chess is not optative (ed. note: elective), it is obligatory, like in Kalmikya, Armenia, Azerbaijan, and many others.

The FIDE Chess in Schools program is developing in many directions. Last year I met several times with the director of UNESCO Irina Bokova, and they will put chess in UNESCO Heritage Program.

Chessdom: Some years back you had support from Rosneft 1 million dollars…

Kirsan Ilyumzhinov: … more than 1 million dollars, they also supported programs in Russia and other countries, so only for Chess in Schools they spent about 2 million dollars…

Chessdom:… but now they canceled this support, so how will you finance Chess in Schools now?

Kirsan Ilyumzhinov: Besides my personal money, other organizations support and will continue to support Chess in Schools, like GazpromBank, Titan Group, etc. Some give one hundred thousand, others two hundred thousand, some smaller give fifty thousand… Not to forget the Greek company of my friend Ivan Savvidis, he also supports children’s programs in the Greek Chess Federation: next month there will be big children’s events supported by him. In Switzerland we have support by Falcon Group and Neva Foundation… In Vietnam is my friend, the former President of Vietnam in Ho Chi Minh and his native town with donations from local companies, and so on. 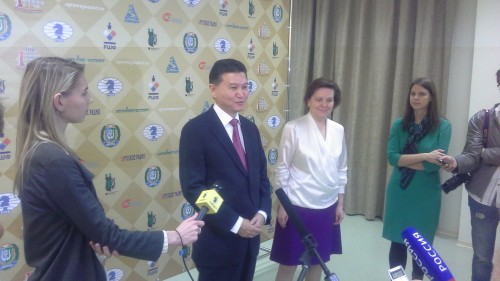 Chessdom: Reviewing your election program, you said that you want to raise the number of chess federations to 200.

Kirsan Ilyumzhinov: Now they are 181, and by the end of the year ten more members will join. I visit and talk to the future members. For example Saudi Arabia, Oman, also some African countries like the Central African Republic. Step by step. I also rely on my Vice Presidents Geoffrey Borg, Ali Nihat Yazici, Deputy President Georgios Makropoulos to help with increasing the members. I think this year we will reach 192 or 193 federations.

Chessdom: A recurring topic in your campaign has been the inclusion of chess in the Olympic movement.

Kirsan Ilyumzhinov: We already talked about one of the most important things I discuss during my travels, the Chess in Schools program. The second is the involvement of chess in the Olympic program. Last year I met with the President of the Olympic Committee Tomas Bach, and we will have another important meeting in Laussane. We are on the way to be included in the Winter Olympic program. There are two main ideas beneficial for the Olympiad: first is to involve the African countries, who do not participate in the Winter Olympics, and the second is to put chess between the morning and the evening program, when there is nothing scheduled.

The idea is very well accepted by the people organizing the Olympiad. And it is good for chess, we are used to playing at the early afternoon!

With Anatoly Karpov, who works also in this direction, we discussed what is the best format. We decided the competition should be rapid chess, for men and women. After this Presidential Board, where we will discuss this idea, the format proposal will be given to the International Olympic Committee.

It is a large process, now I have organized a big lobby for chess inside IOC and we will see the results.