Chessdom: Hello Oliver, congratulations on becoming a Grandmaster! What are your impressions from the Raja Dr. Nazrin Shah Invitational Masters?

Oliver Barbosa: My impression on the Raja Dr. Nazrin Shah Invitational Masters is that it’s one of the best organised tournaments I’ve played in. From the date of arrival there in Swiss Garden hotel until the date of our departure.

Also in terms of strength I can say the tournament is a strong one too since there are just three Grandmasters and and the rest are strong IM’s some holding 1 or 2 GM norms so probably almost all are of near GM-strength. 6.5/9 is I think high enough requirement for a GM norm. 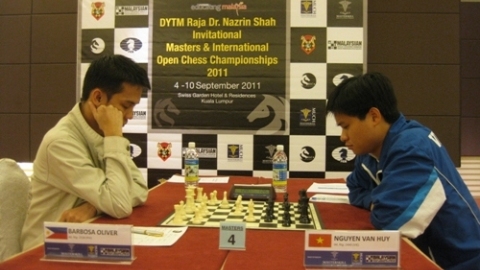 Chessdom: You’ve been very active lately, playing in a large number of tournaments. Did you task yourself with completing the norms this year?

Oliver Barbosa: My 1st norm came from Asian Individual in Mashad, Iran, then came the Battle of the Grandmasters in the Philippines, it’s our National Championship, and I earned the 2nd norm there. Getting the 2nd norm within a short time after my first gave me much more confidence that I can nail the title within this year. That is of course with the outmost support of our federation President Chairman Prospero Pichay.

Chessdom: Competing so often must be very difficult, both mentally and physically. How do you manage to keep and improve your form?

Oliver Barbosa: Playing so often and not to mention being consecutive tournaments would mean I should be mentally and physically prepared. Late last year I started training with GM John Paul Gomez and GM Wesley So, and around November last year sir Pichay asked me directly that he would give me a shot at the title and I don’t want the support to be gone so I didn’t waste any time then and prepared myself that in 2-3 years of full time chess work, if I am not a Grandmaster, then I should think of something else than chess.

When I started training with two of the top GM’s of the Philippines I never doubted that I would get the title in one year. It’s already high level training for me because working with two GM’s and doing chess the whole day is new for me. They are top players so they knew that physical condition is crucial too so we didn’t lack physical training. 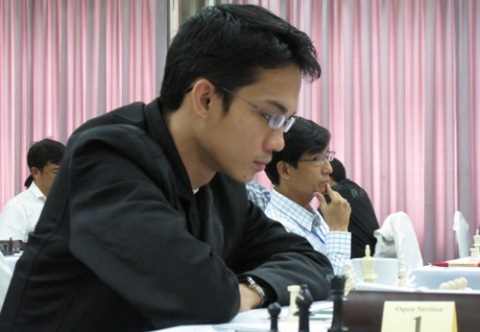 Chessdom: How would you describe your playing style? Which game do you consider to be your best?

Oliver Barbosa: I started chess with mostly blitz games and tactical openings but as I matured and lost a lot of games tactically, it was a perfect timing to be handled by then NM (but now GM) Bong Villamayor. I was able to absorb his analytical abilities and judgment in positions and slowly in most of my games from then I can see my play to be positional but of course I don’t skip tactics and puzzles everyday.

My best game for this tournament I think is my game against Goh Wei Ming on the first round. I sensed that he was fully prepared against the line I played (which I didn’t review that day before our game) so just in the opening I played a different line I haven’t fully finished studying. I managed to have space advantage in the opening and as he was trying to concentrate on move c5 which would free his pieces, I decided that my play should be directed to attacking on the kingside. I made some accurate moves during my attack and due to time trouble he blundered in the end.

Chessdom: Great news for the Philippines’ chess fans is that Richard Bitoon also qualified for the GM title from the same event. This raises the nation’s number of Grandmasters to 16. Can you tell us more about the chess progress in Philippines?

Oliver Barbosa: Me and Richard Bitoon are considered to be the 15th and 16th grandmasters of the Philippines. I think the time mr. Pichay came to be our federation President, that’s the start of the new age of Philippine chess, I mean Philippine chess is getting on to the next level. Because you see talent without support, it’s very hard and could just maybe lead to nowhere because support is very important in our game. 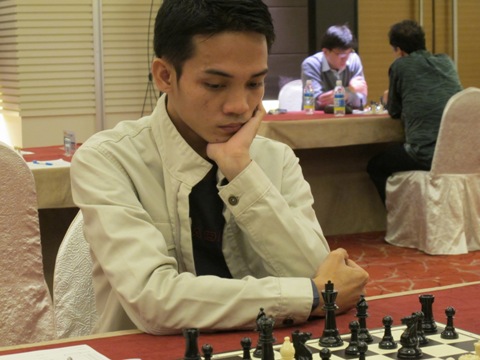 Chessdom: What kind of support you receive in Cebu and Philippines?

Oliver Barbosa: I’m from Rizal Province and our town Mayor Joric Gacula and our Provincial Governor Jun Ynares III gives me support during my tournaments abroad.

Chessdom: Did you consult with your compatriots Joseph Sanchez and Roland Salvador, who are very successfully competing in Europe, to try the tour on the old continent?

Oliver Barbosa: Grandmasters Sanchez and Salvador tell me stories of how they got the title in Europe and how strong the tournaments in Europe are. If would be given support to play and upgrade the level of my play there I would be very much interested but of course it would not be easy as it’s very expensive there.

Chessdom: Thank you for the interview and good luck in the future competitions.

Oliver Barbosa: Thank you very much for this interview sir Goran :)

PS. About my next goal – it’s to breach 2600 and hopefully to 2700. I believe I can reach it because of my current training, confidence, discipline and support of course.