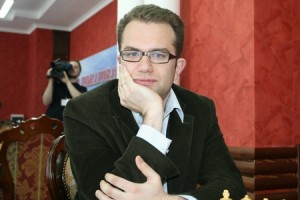 Pavel Eljanov is Ukrainian Chess Grandmaster born on May 10th, 1983 in Kharkov (Ukraine). Eljanov holds the title of GM since 2001. He is twice Olympic Champion with the Ukrainian National team. His peak ELO was 2761 on 01.09.2010, placing him on the 6th place in the world.


Here is an interview with Pavel Eljanov conducted by GM Alexander Ipatov. 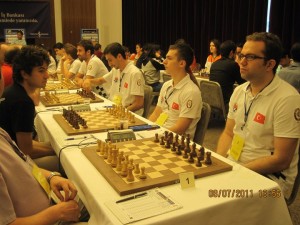 Eljanov and Ipatov as teammates in Turkey

A.I : Good afternoon Pavel! First of all, congratulations for the birth of your daughter! What are your plans now : are you going to dedicate more time to the family or it is a big motivation to go up in chess?

P.E. : Thanks a lot! First of all I am very happy and of course I would like to be with my daughter as much as I can and missed her very much during my trips. After her birth I was in Chinese league for a long time from December 2nd to December 7th! Of course my permanent travels will be compensated by regular gifts :)

A.I. : Tell us, please, how are you combining family with a professional chess career?

P.E. : Better to ask my wife :) I’m very grateful to her for understanding not only my regular absence from home, but also the usual game obsession for every chess player!

A.I. : Have you already planned a schedule for 2012? Which type of tournaments are dominating in your current chess career : leagues, opens, or top closed events?

P.E. : Unfortunately my ELO is too low now to count on invitations to any big tournaments. But still at least I have some leagues and will probably play in some official tournaments like the European championship or the Ukrainian championship. Thanks to efforts of our federation president Viktor Kapustin this tournament has become rather prestigious and interesting!

P.E. : I would like to be more stable player. Once my ELO was 2761. I have to get it back and to reach again this level.

A.I. : The theory in chess is developing very quickly. How do you manage to be aware about novelties? Is theory the key to get 2700 ELO rating, in your opinion?

P.E. : Novelties are easy to manage – Sleep well and have chess dreams :) Now seriously, there is no big secret – examine top grandmasters games and analyze with help of chess engine extensively. To get to 2700 all you need is talent, good nerves and Dvoretsky + Chess Evolution books.

P.E. : Sometimes there is a really little difference! But in general I can say that players with 2700 are more professional and stable in long run.

A.I. : What are your favorite chess players?

P.E. : I can say that the most recently I like very much to watch the games of Levon Aronian because rather frequently I just don’t understand how he is outplaying his opponents!

A.I. : Do you have some other hobbies apart from chess?

P.E. : I liked very much football during my childhood. A few years ago my big friend Boris Gelfand has infected me again with this sport, with his addiction to FC Barcelona. Now I know much more about the club, why Xavi who is scoring rather rarely, and why he is really such a great player!

A.I. : What is your favorite movie?

P.E. : I have many that I like. To name just one let it be: Fight Club. This one I always ready to watch again. Also I like many TV Show’s. My favorite is clearly: Breaking Bad.

Alexander Ipatov’s Chess Clinic and Simul Great Success
Some people know and understand a lot about chess, others can play excellent chess, some others, again, can teach well and some know how ...