Belgian Grandmaster Vladimir Chuchelov is accompanying Italian star Fabiano Caruana in the Thessaloniki Grand Prix. He kindly agreed to a short interview after the beginning of round 9.

Q: Vladimir, you are here in Thessaloniki as a trainer of Fabiano Caruana, who is sharing the second place after eight rounds of the tournament. How are you pleased with his progress?

A: Overall, it’s too early to say if we are pleased or not because there are still three rounds to go. He started the event confidently, although in the last few rounds I guess all the participants are getting tired and there are more mistakes and critical moments.

But as always happens in this kind of qualifying tournament I believe everything will be decided in the last round.

Q: Today Fabiano is playing Leinier Dominguez, with whom he is sharing the second place. Fabiano is white and I see that he is blitzing his moves in the opening, does that mean you have prepared something special?

A: Well, we had the rest day so we had time to prepare something. The pairings are very interesting, we have the leader Kamsky in the last round and today is Dominguez. 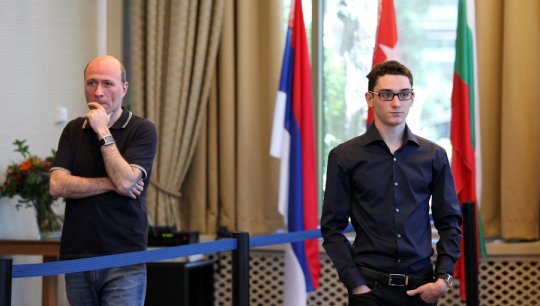 Q: Just seconds ago you were watching the game on the screen, is this something that you had in your analysis (Be2)?

A: (Smiling) Okay, it was part of our preparation before the game obviously.

Q: Can you tell us something about the games that were played earlier in the tournament. For example, before the rest day there was a very interesting clash between Fabiano and Alexander Grischuk.

A: This was one of the very critical games where something strange happened. We were completely ready, opening-wise, for the line that Grischuk played, but as it happens sometimes, Fabiano simply forgot all the preparation and more or less had to find the good moves on his own.

Fortunately, the central structure was quickly resolved and black got a very good position. But then again, some kind of inaccurate move was played and the final move before the time control was a mistake (40…Kh6) that gave white some real chances. Okay, even before the mistake black was somewhat worse, but it was possible to hold that position.

Q: This Bg4 in the opening was part of your repertoire?

A: No, no, from that moment he started playing on his own. (smiling)

Q: Another interesting game from earlier rounds was against Hikaru Nakamura, when Fabiano couldn’t convert the material advantage.

A: Yeah, it was strange. Actually, what he saved against Grischuk was a full compensation for what he missed against Nakamura. It can happen sometimes. Okay, he was not very happy about the result, the advantage was slipping move after move, but it can happen, it is a difficult tournament I can tell you.

Q: You are also working with Anish Giri. Is this co-operation on the same level as you have with Fabiano or you dedicate more time to one of the players?

A: Well, it is difficult to say, because Anish was in the final school year and he was pretty occupied with exams and graduation.

I started to travel with Fabiano, to accompany him to all the tournament, except for Wijk aan Zee, which was not very successful for him (laughing). That was the signal that I have to go like this.

Now that Anish has graduated, I will dedicate more time to him, but I think I will mostly accompany Fabiano in the tournaments.

Q: So what happens when they play each-other?

Q: You have two trainees who are among the world’s best players. So what is your secret?

A: There is no secret, just a lot of hard work actually. In fact, I am also working with many other students.

Q: Do you believe that your chess education in Russia helped you to better prepare your students, or you have developed your own system?

A: In a way, I wouldn’t say there was some special education in Russia, we just benefited from the general environment where chess was loved and respected.

I have developed my own training methods throughout the years. I started to work in year 2000 when I switched to coaching and that is when I started thinking about concepts.

Q: Do you have time to compete in the tournaments?

A: No, not really. I only play a couple of games in German Bundesliga, but this is mostly because I want to meet some friends there.

Chessdom: Thank you very much for the interview.