Boris Golubovic is International Master since 1997. A few years back, due to obligations at work, he almost stopped playing, but he still followed chess. Now he is the President of the Rijeka Chess Club, a member of the Croatian Chess Federation and one of the main architects of the success of the 21st World Senior Chess Championships.

Q: How and when did you get involved with the organization of the World Senior Championships?

A few months ago, owing to personal reasons, Mr Vrhovnik had to withdraw and he proposed me for the President of the club. I accepted the position and among other things I inherited the organization of the World Senior Championship. I want to thank Mr. Vrhovnik and also GM Miso Cebalo, who succeeded in winning the bidding procedure to get this event from FIDE, for their precious help and support that allowed me to work in the best atmosphere. 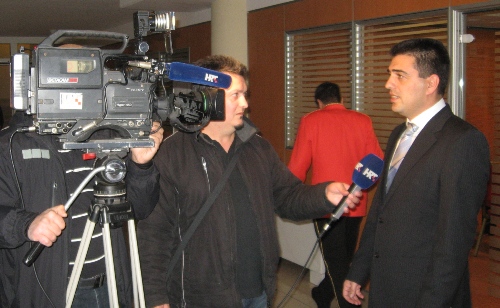 Interview of Boris Golubovic for the Croatian TV

But it is quite different to live an event as a player and as organizer; you have to consider everything from another point of view and it is necessary to work hard to be sure that all the details are covered in the best way.

I had a great help while I was getting involved in the organization – almost the same team that operated in the European Championship last year, young women and men of high-quality instruction and very professional. I want to thank all of them for their wonderful work, and in particular GM Vlado Kovacevic who is taking care of the comments on the website. Moreover thanks to you for your work as press officer.

Q: Thank you very much; it was a great honour for me to work with the Rijeka team! But now let us find out something more about you: you are the youngest president of a chess club in Croatia. When did you learn to play chess?

A: I was about 10 years old. I learned to play in school owing to a teacher who was a player. Then I started to go to the club. I became junior champion U-15 and after that junior champion U-19. I got the title International Master in 1997 and played for our national team in European Team Championship (Leon, 2001) and in Mitropa Cup four times. I played many tournaments; I won for example the tournament in Trieste in 2004.

Now, above all because of my job, I cannot play often; still I do sometimes for my club team. Moreover four month ago I became the father of Lana and I think that this is the best event in my life … for the moment! 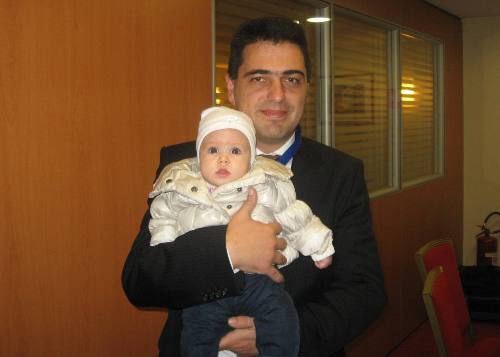 Boris Golubovic with his daughter Lana

Q: What is your feeling about the Championships?

A: I am very satisfied – for the number of players and for high technical quality, with many GMs and IMs and many players that made the history of chess. The female championship broke the record of participants (40 players) and we have representatives from all the 5 continents, in total 44 countries.

This is the first World Championship played in Croatia and I believe that our Chess Federation and local political authorities are happy with the result. Both the Lord Major of Opatija, Ivo Dujmic, and the president of our Federation, Stjepan Sturlan, attended the opening ceremony. We have a great number of people visiting our website every day and following the games live: we already have more than 100.000 single visitors and more than 50 websites all over the world following the event daily.

Moreover many Croatian players are fighting for the top positions and this is important for our country.

Q: So you want to go on with the organization of chess events?

A: Yes, sure! I would like Opatija to be considered a “chess destination” for all the chess players in the world.

We tried to organize the European Chess Club Cup in 2012, but ECU assigned it to another country. We also make an offer to organize again the Senior World Championships, we will see.

The Rijeka Chess Club is well known in Croatia, it is almost the only club that takes care of the organization of events and tournaments. Next year it will be the first centenary of the foundation of our chess Federation and we will have many appointments, for example a round robin GM Tournament, the Summer Open at the end of June and the traditional “Mediterranean Open” in November. 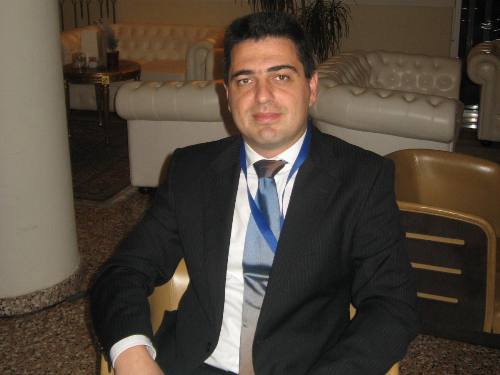 Chess lovers will find the complete calendar on our website (www.rijekachess.com) and I am sure that many of them will come – or come back again – to Opatija. The town is very nice, hotels are not expensive, there is a possibility to organize nice walks and excursions, the weather is beautiful in summer and in winter; so chess players can come with their wives, husbands and relatives who will enjoy the city while they are playing!

Q: The last question, concerning your Federation. What about young players?

A: The Croatian Chess Federation is working hard to popularize the game of chess all over our country and in particular among young generations. We are trying to get an agreement with our political authorities to have chess in schools but this project needs some time; for the moment the main work is done by chess clubs.