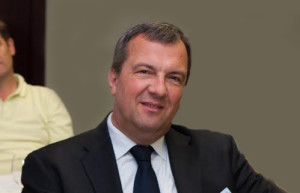 Martin Huba is the President of the Slovak Chess Federation. For the upcoming ECU elections, Martin Huba is part of Zurab Azmaiparashvili’s ticket for the position of Treasurer.

Here is a detailed interview with Martin Huba about is ideas for ECU, the possibility of working with European programs, the ideas he will bring into ECU, as well as chess in Slovakia and chess in schools.

Dear Martin Huba, thank you for accepting this interview. You are in the ticket of Zurab Azmaiparashvili for the ECU elections. Why did you decide to run on his team?

As a volunteer in our chess community I do not have special ambitions. Actually I was not thinking beyond the Slovak chess „borders“ until I was contacted by Mr Azmaiparasvili and learnt about the possibility to join his ticket. The decisive moment was during my discussions with Zurab when I felt his enthusiasm and sincere wish to bring a strategic change to the European chess. I really trust him and therefore I agreed to support him with my energy, time, and effort. Additionally, the composition of our team is excellent and I highly appreciate each individual member. I was honoured with the position in such a team and I take my mission very seriously.

Your position in ECU will be Treasurer. What are the changes that you will introduce in the management of this section?

Transparency and progress. Transparency means all financial plans and reports should be made public and not a cent should be used for political purposes. Progress is a more difficult task to develop from the present static financial management covering mainly overheads, towards real joint development projects in Europe.

Are you acquainted what is the state of ECU budget? ECU does not have any corporate sponsorship for the past 4 years, what are the chances this to change soon?

As I said before the present ECU budget consists of administrative costs and our task will be to find new financial sources in the future. It is fantastic that Zurab Azmaiparasvili already found new sponsors and it will enable a running start of the new ECU management. We should also work hard to use additional sources like European funds that are not used at all by now. In a discussion with federations we can start joint development projects that could be in the case of an agreement financed jointly.

On May 5th you met with the current ECU President Danailov in Bratislava. What did you discuss?

Of course except of other topics we discussed mainly the future of the European chess and upcoming elections. The discussion was very fair and open I think it can be a good signal for the future in the ECU. There must be a competition of ideas and programmes but we have to respect each other. At the end we are on the same boat and all of us we try to develop chess. I informed Mr Danailov about my joining the team of Zurab Azmaiparasvili and we continued in our interesting discussion.

You were responsible the coordination of development projects in the city of Prievidza. How will this experience help you in the future position of Treasurer?

It was the start of my Professional career more than twenty years ago. Since then I decided to work in the area of international development projects funded exclusively by EU countries or the European Commission. As my core experiences are in the area of designing of European programmes or evaluating them I can bring a few novelties and broader perspective when being a Treasurer. 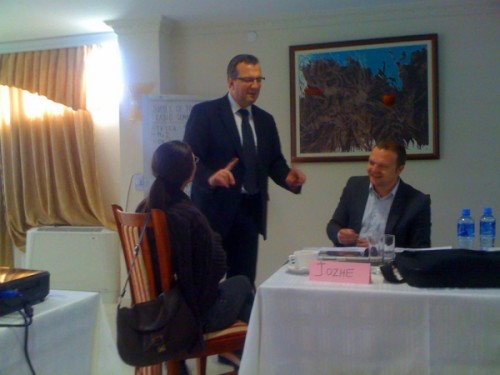 Indeed your biography mentions experiences includes programming, implementation, monitoring and evaluation of European projects and programmes in Slovakia and abroad (Nicaragua, Czech Republic, Romania, Bulgaria, Macedonia, Bosnia and Herzegovina, Albania, Serbia, Mongolia, Kenyaand South Sudan). Does this mean that your tasks in ECU will spread beyond the role of Treasurer?

First of all I am a team player and will accept my role in the team of Zurab Azmaiparasvili and I will fully support our team success. But my experiences not only from my professional life but also from my position of a core member for Europe in the FIDE Development Commission will of course be available to the team and Zurab, who I believe to be the future ECU President.

During the last 10 years you support local chess clubs. You probably know from inside the needs of chess clubs and amateur level players, what will you bring in ECU to make a change in this direction?

As it was said several times, we have to rethink and analyse all existing tournament formats and to come with improvements or even new events. In our team there are people much more experienced in this area than me, but I think the idea of having again zonal tournaments could systematically support chess development.

You are also a President of the Slovak Chess Federation. Can you tell us more about the development of chess in Slovakia in the past years?

Difficult to describe it by few sentences. I have been in the position since 2009. The first three years were quite painful due to financial reform we had to implement (higher membership fees, reduction of overhead costs…). We made more attractive formats of our tournaments (for example in Extraliga last three rounds played on one place, all games transmitted online), started Chess in School project, established the system of national academy and regional academies, at the moment we are agreing on the national championship system (round robin of 5 GMs and 5 talented players and qualification open for the next year round robin…). A lot of work was done in the PR and marketing (new logo, slogan CHESS IS MORE THAN SPORT, webpage, facebook, twitter etc…). Of course there is still a long way to go. 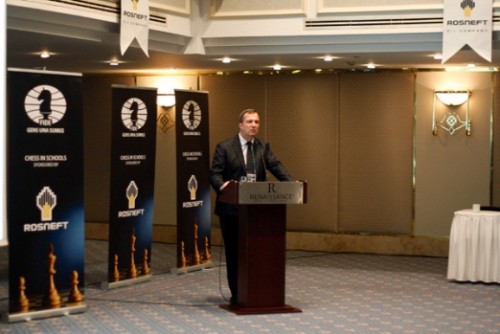 How do you evaluate your chances in the Chess Olympiad? What is the Olympic moto and spirit that the teams of Slovakia will carry?

I appreciate highly the team spirit of our teams and the atmosphere during the Olympiads and other international events. The great success for us would be any place within first 20 in both categories.

Chess in schools is the future of chess. Is Slovakia working in this direction?

Thanks to the FIDE project and know-how support, we started a nationwide project. We are now in about 300 schools in Slovakia, last year competition was played by a few thousands of kids, thousands of chess sets were distributed to schools, and we also published three volumes of School of Chess. The education system in Slovakia is decentralised and we have to contact individual mayors one by one to convince them to let chess in basic schools. We need urgently accreditation of courses for teachers and a help from the ECU would be more than welcome.