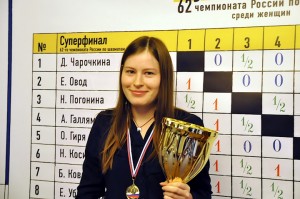 Hello Natalia, congratulations on winning the Russian Superfinal! How does it feel to hold the most important national title of Russia?

Of course, it is nice to win such a strong event, especially undefeated. However, I am generally more self-improvement-oriented and don’t make a fuss out of victories and titles.

It was a difficult competition with a strong field. You employed a very interesting strategy from the start, “win with black, draw with white”, quite contrary to general chess practices. What was the secret of the good preparation with the black pieces?

Yes, we even had a joke on our team about that. GM Roman Ovetchkin used to cheer me up by saying, “Ok, today you have your hotshot color – Black!”. I think it’s all about psychology. You might have noticed that Black scores rather decently lately. Maybe it is because people often feel like they should be playing for a win with White and they get disappointed if they end up having no real advantage. As Black, you can calmly equalize and then try to take your chances. This approach suits my style rather well.

Many top players keep their coaches secret. You mentioned GM Ovetchkin. Will you reveal the rest of your team?

GM Vladimir Georgiev and GM Roman Ovetchkin were helping me via Skype. I am very grateful for their effort!

Besides the coaches, who else played an important role for you in the event?

My husband, Peter Zhdanov, accompanied me to the event and supported me a lot.

Also, of course, our son Nickolai and my Mum. I used to call them every day. 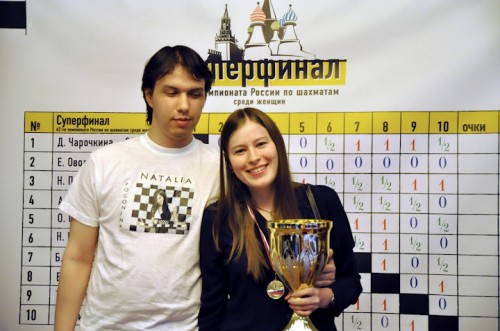 An interesting fact, the women competition of the Russian Finals was more viewed than the men’s during the Chessdom live games transmission. Do you think this is a logical consequence of the development of women chess in general, or the specific field was of high interest?

Great news! That’s what we have been discussing recently on Twitter with Susan Polgar and many other top chess tweeters (see August 2 tweets). Women’s chess is more fighting and more exciting. The only drawback is that female players have lower ratings. Nonetheless, most chess fans can’t tell the difference between a 2500 and 2700 in terms of the quality of chess. Also, in order to learn something, the gap between the audience and the players should be reasonable, not enormous. Therefore, women’s chess is both more entertaining and more instructive for the prevailing majority of the viewers.

Overall, the marketing potential of chess players is seriously underestimated. Chess is strongly associated with intelligence, high-tech, classical traditions, chivalry. Financial institutions and IT companies should be willing to seek top players’ endorsements, but in the reality it rarely happens. Most chess players don’t have skilful and influential managers and have no idea how to present themselves to the public. For example, as far as I know, only 12/20 highest-rated male chess players have their own websites and only 2/20 female players. Moreover, I am sure you have never been to those websites (or at least haven’t seen most of them)! :)

In my opinion, both male and female players could make a lot more to promote the game. Unfortunately, most of my colleagues only play chess and do nothing else. Why not write articles, publish books, give simuls, create training courses, record videos, hold Q&A sessions and appear at promotional events? I know it takes time, but the question is: are you playing chess only for yourself or for everyone else? If you care about other people, you should be willing to take your time to help them.

The Olympiad is coming. The expectations from the Russian team have never been less than gold. Does this put additional pressure on you or is it a motivating factor in the game?

I don’t like this hype and process of putting stress on others. At the closing ceremony the Chairman of the Russian Chess Federation said he wishes us to perform well and expects us to win gold. Of course, we all will do our best to do so. However, some people seem to think that athletes owe them something and can earn rewards effortlessly and in the blink of an eye. Any professional player understands that the competition is going to be tough. Here is a prognosis for the Chess Olympiad. I more or less agree with it.

Generally speaking, I have noticed that it’s very hard for anyone to compete as a favorite or under high expectations. Back to the Superfinal: one of my ex-coaches was very ambitious and always kept repeating that this is “my year” and I should win the tournament. Then, if something went wrong, he started becoming grim and acting like I have let him down, thus making me feel even more upset. Over the last three years we adopted a different strategy: forget about goals and ambitions; just enjoy playing chess. As a result, in 2010 I was tied for first (got silver after the blitz tie-break); in 2011 was in clear 2nd heading into the final round (which I lost); in 2012 I got clear first. 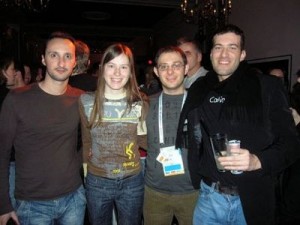 You are in the list of players for the Women World Championship 2012. What are your expectations for Khanty-Mansiysk?

As a chess player, I am interested in constant self-improvement: performing better, increasing my rating, getting to compete against the world’s best. Titles are secondary. Most interviewers are surprised by this attitude and have this standard expectation that all the top chess players’ main goal is to eventually become a World Champion. Of course, I would be glad to do well at the next WWCC, but it’s not like it’s my #1 priority.

The Women World Chess Championship is a rather different format, does knockout worry you? Do you have a special preparation for it?

Currently all my thoughts chess-wise are occupied with the Chess Olympiad. All the members of the Russian chess teams have assembled at a special training session. I hope it will be beneficial for both men and women!

After the Olympiad is over I will start thinking about the European Club Chess Cup (our team, AVS, is the reigning champion) and only then about the WWCC. Knock-out is a very stressful tournament, so psychology plays a critical role here.

Olympiad, Women World Championship, and in between the European Club Cup 2012. A very busy schedule.

Yes, indeed. The team composition will be similar to the one we’ve had before. I would rather not announce the team composition now since I am not entirely sure that it has been finalized. As to expectations: I hope we will do well and maintain the result we’ve had last year. :)

One final question, multiple Chessdom readers are asking when you will be returning for game commentary on Chessdom, they miss your precise estimations :)

My schedule is very busy nowadays. I had just two free days between the Russian Superfinal and the training session. And then people started calling me and saying that I should play in this tournament or write that article. Very hectic life. When I have more free time, I will certainly return to Chessdom. Meanwhile, thanks to the chess fans that are supporting me. In fact, I have seen a lot of positive comments related to my games at Chessbomb and elsewhere. This motivates me to keep going! Warm regards to you and your readers!

Note: do not forget to visit the always up-to-date wonderful website of Natalia Pogonia www.pogonina.com