Dario: Is this the first time you play in Italy?

Vitiugov: Yes, and actually, it is the first time I travel here. But it is especially significant for my career as I had never received an invitation to such a high-level event before.

D: You have improved considerably these last four years, do you get a chance to train with your fellow Russia players often?

V: I have had the chance of working with a number of Russian Grandmasters, such are Najer and Kharakullian. During these sessions we study openings, which are a fundamental part of modern chess, working on many lines so as to have a wide repertoire. We also train on other aspects of the game.

D: Could you tell me if, in your opinion, there are any 2700+ Grandmasters who show a particular style, and which of these players could be considered a model for certain aspects of their play?

V: It is difficult to say who the best player is, or who can be singled out as having a certain style, as modern Grandmasters need to be universal. For example I play different openings, and in some occasions I play extremely solidly, while at other times I can go for sharp play. 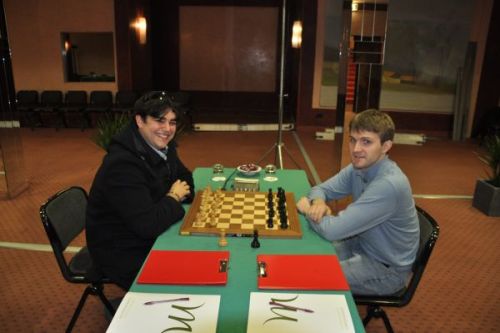 D: Four years ago you considered your game with Popov to be your best game, but having played at high level for a while now, what are your new favourites?

V: One of the games I like to look back to is my draw against Nepo in 2008, it was quite an exciting and extremely complicated Paulsen, in a very sharp line. It was necessary to play in a very concrete and precise manner, which is exactly what I did.

Another game I like to remember is my win against the Bulgarian GM Ivan Cheparinov in the last round of the Aeroflot, which allowed me to end the tournament with an excellent score. Much in the same way, my game against Tigran Petrosian was critical and decisive as it allowed us to win the European Club Championship.

D: Which great champion of the past has had the greatest effect on you?

V: The players I have appreciated the most are Bobby Fischer and Alexander Alekhine.

D: Back in 2010, Russia was allowed to field three teams in the Olympiad, but in 2012 they will only be allowed one. Do you think Reggio Emilia will influence the team selection in any way? What do you think are your chances of making it into the squad, considering the number of strong Russian players?

V: I will try to convince the current coach Yuri Dokhoian (who in the past has coached the Women’s team) that I am a worthy selection for our Olympic team for Istanbul 2012. But I know that to achieve this I will have to contend with a group of 8-9 players who also wish to join that prestigious team. One of these will certainly be Alexander Morozevich, who is also here in Reggio Emilia.

The New Year’s tournament will be a good chance to impress, even though it won’t be decisive as there are still a few months before the Olympiad, and there are other important events such as the Russian championship and the European Individual championship. 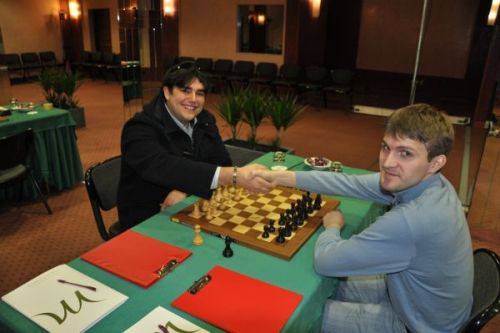 D: Even though you are quite young, you have already published a book on the French. What other books do you have planned for the future?

V: As I am a big fan of the French I want to publish the second part of that book. It is an interesting enterprise and I find it quite stimulating but in all honesty my priorities go to improving myself as a player and achieve some measure of success, and I hope that that will be the main direction of my career.

D: What do your parents think about you playing chess, and what did they tell you 10 years ago when you started off?

V: My parents expected me to have a normal job, such as engineer, doctor, architect. They have now understood that chess can not only be a hobby or a sport, but my main occupation also.

Interview with Fabiano Caruana
Fabiano Caruana talks about his game with Maxim Rodstein and Italy's victory against Israel in the 5th round of the European Team Chess Championships.